On and On We Go

After not working on Kuewa for five days due to a bad back, I'm at it again. Well, I was until today. It's amazing how things pile up sometimes. Susan and I did a 3-stop errand run yesterday so I thought today would be lighter. I ended up going to 14 different places! And I forgot one errand. It's a long story, but it's all for ongoing little projects, only one of which is tangentially related to Kuewa (boxing up the old ports to ship to Camarillo where a guy is restoring an old boat too.) How did we ever live the rest of life when we were both working?

What I had been doing at the boat was the usual:  Chisel out bad wood...sand underlying fiberglass...mark and cut template...mark and cut 5 new fiberglass sheets...clean old fiberglass with acetone...lay fiberglass...grind and sand...apply Bondo...sand and fair. On to the next. I laid the last ten layers of fiberglass on the last two port openings on Friday. Very happy to have that part done. 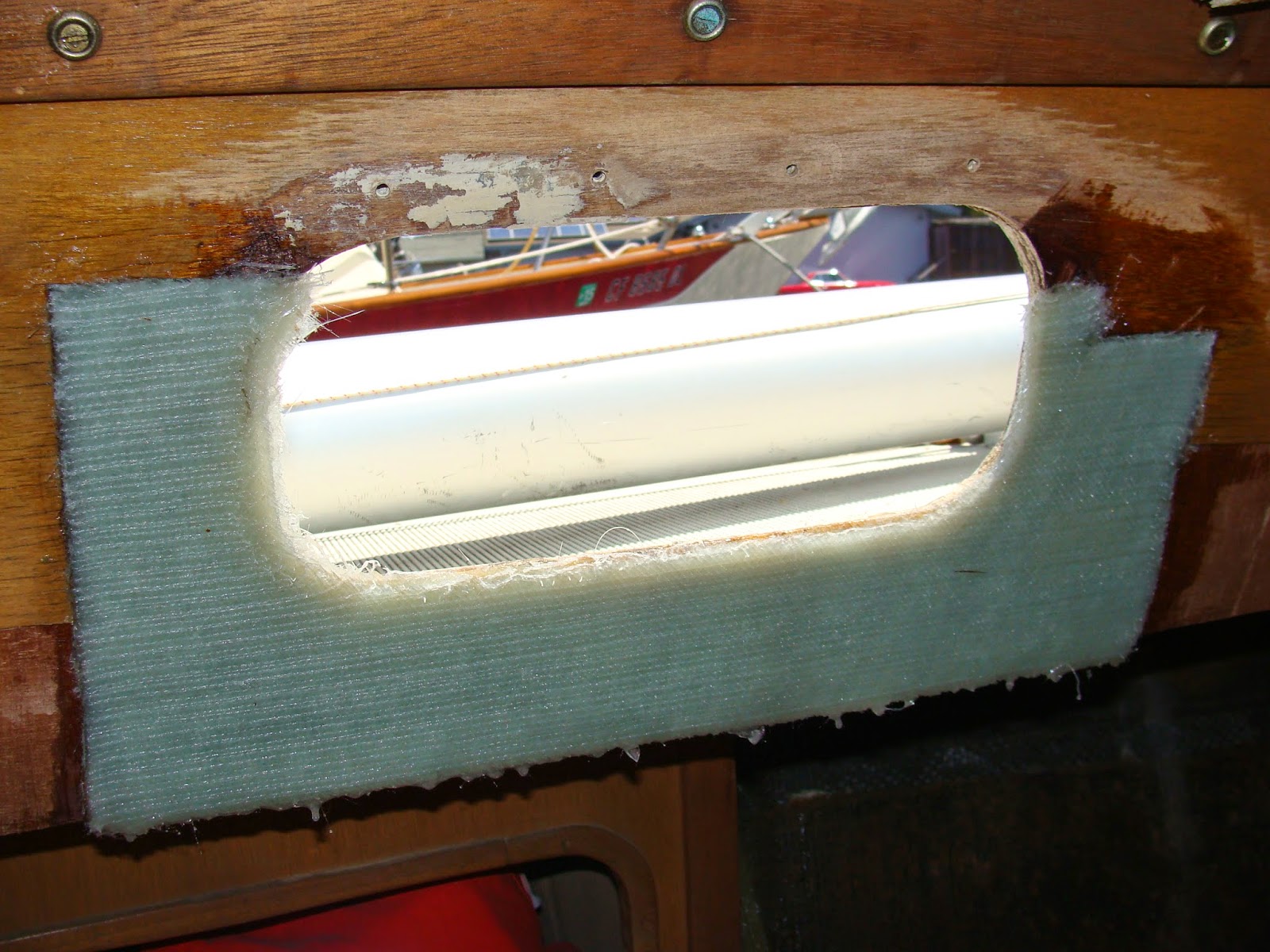 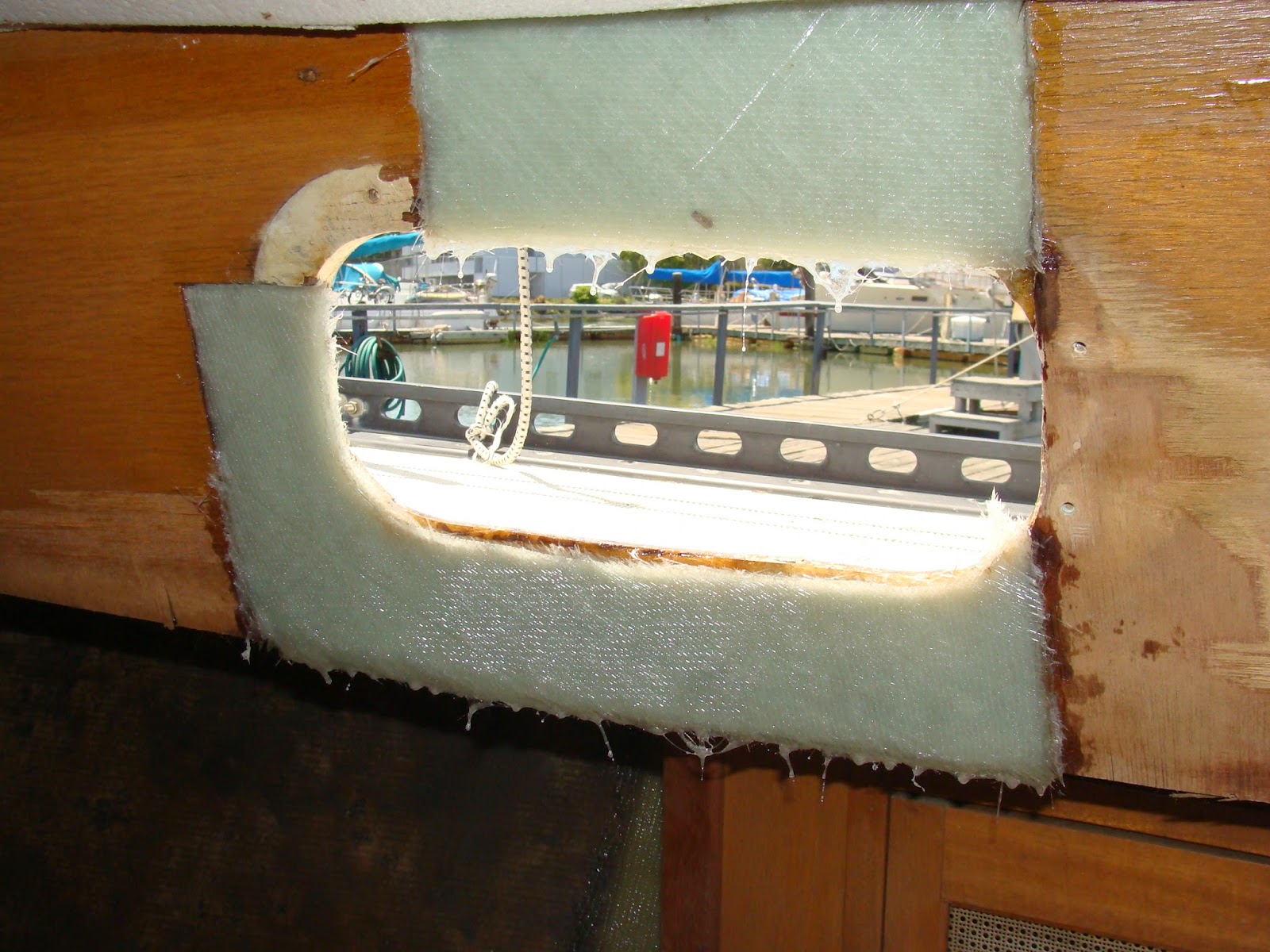 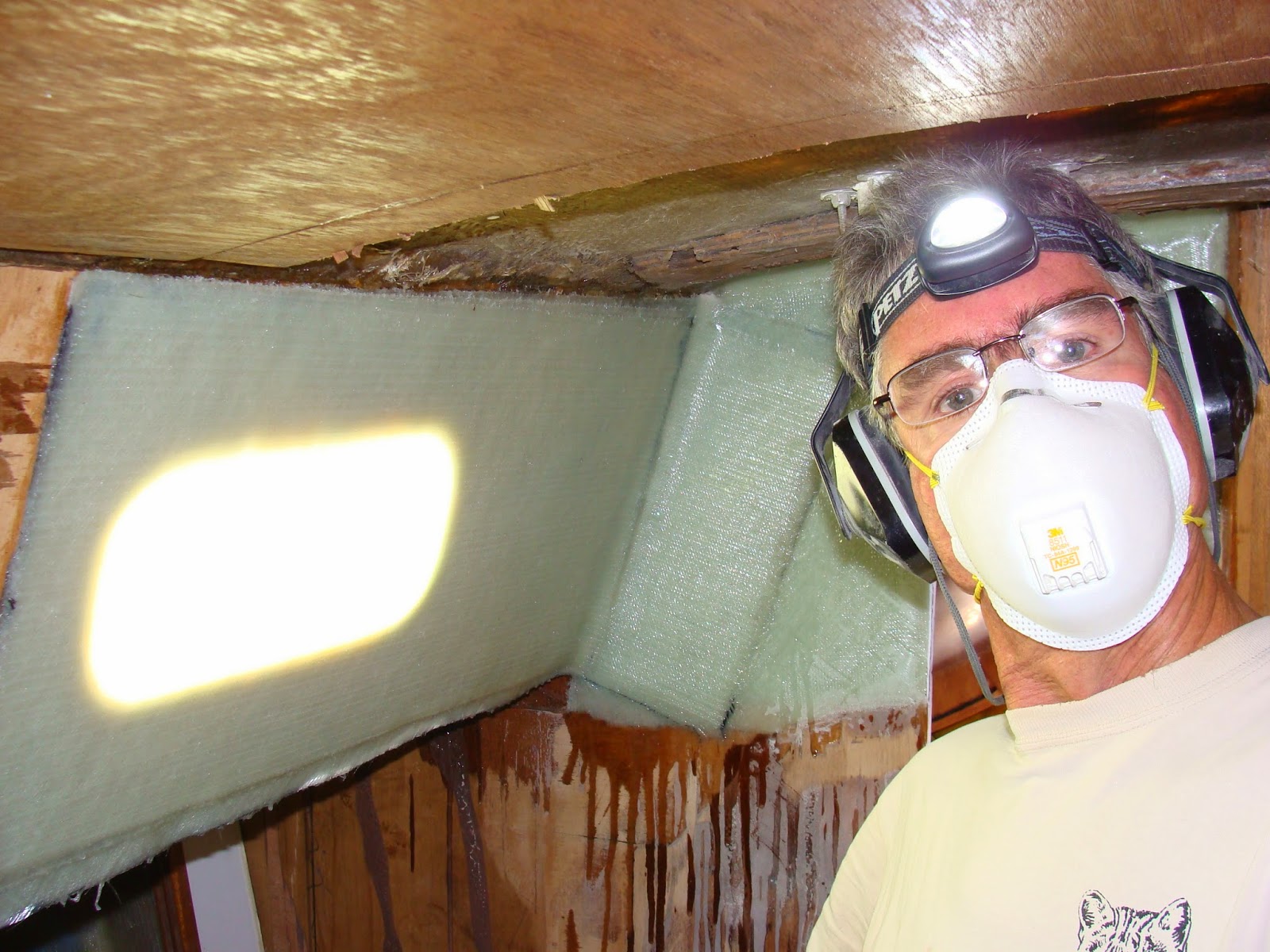 I'll need to tab three more small bulkheads before the final finish is applied to the interior of the cabin sides. Stronger (almost) every day.

Posted by Kuewa's Voyage at 4:25 PM No comments:

Hello, my name is Tony, and it's been 22 days since my last post. The reason for the silence is that the work is plodding. The cabin trunk exterior is ready for paint and the interior should be painted also, before installing the new ports. The idea was to remove the 8 old opening ports and prep the inside for paint. The reality is:  this is daunting. The pictures show it. 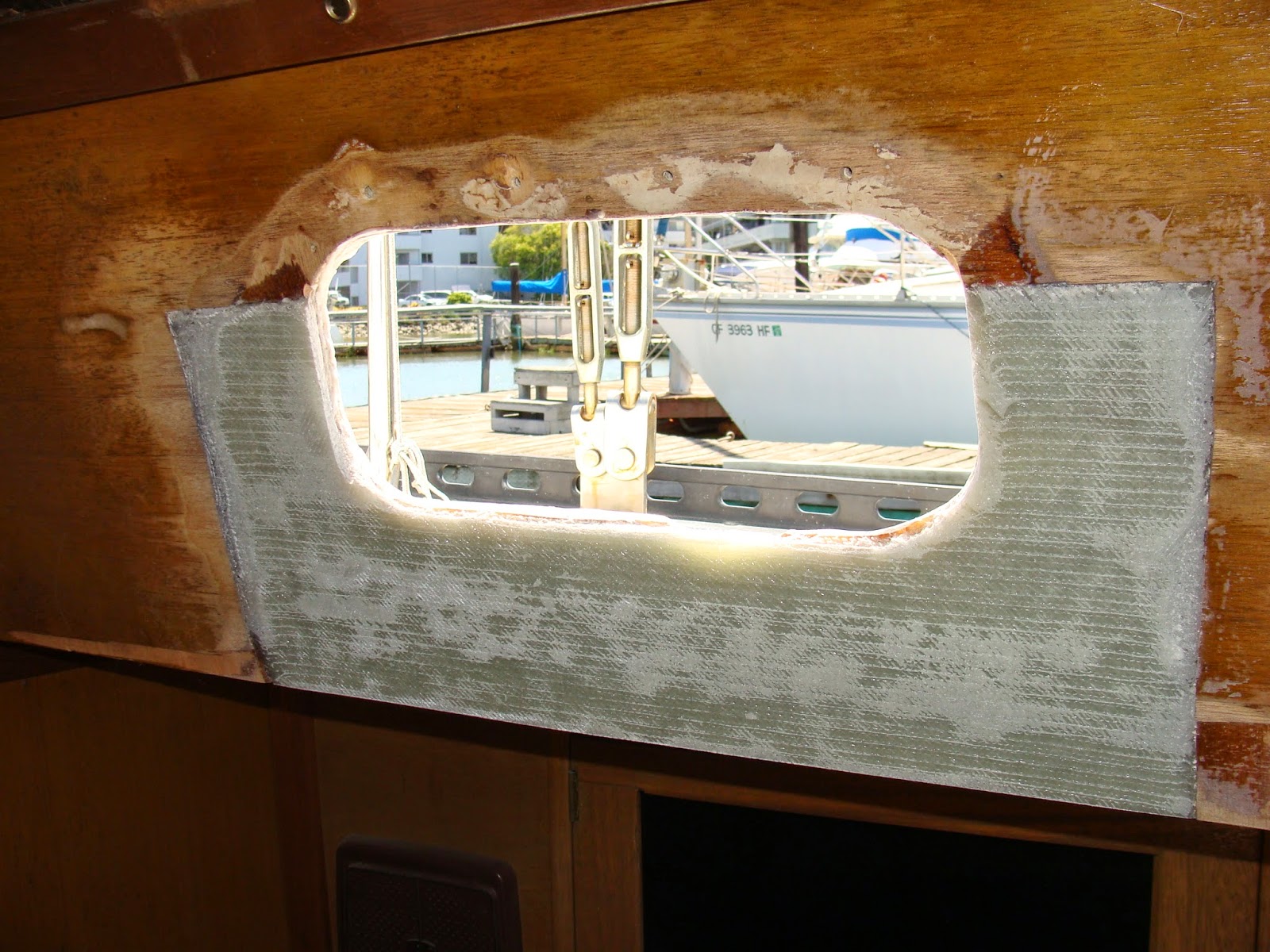 The last post showed this port with clamps gluing the delaminated glass back together. This is the repair of the damaged wood. 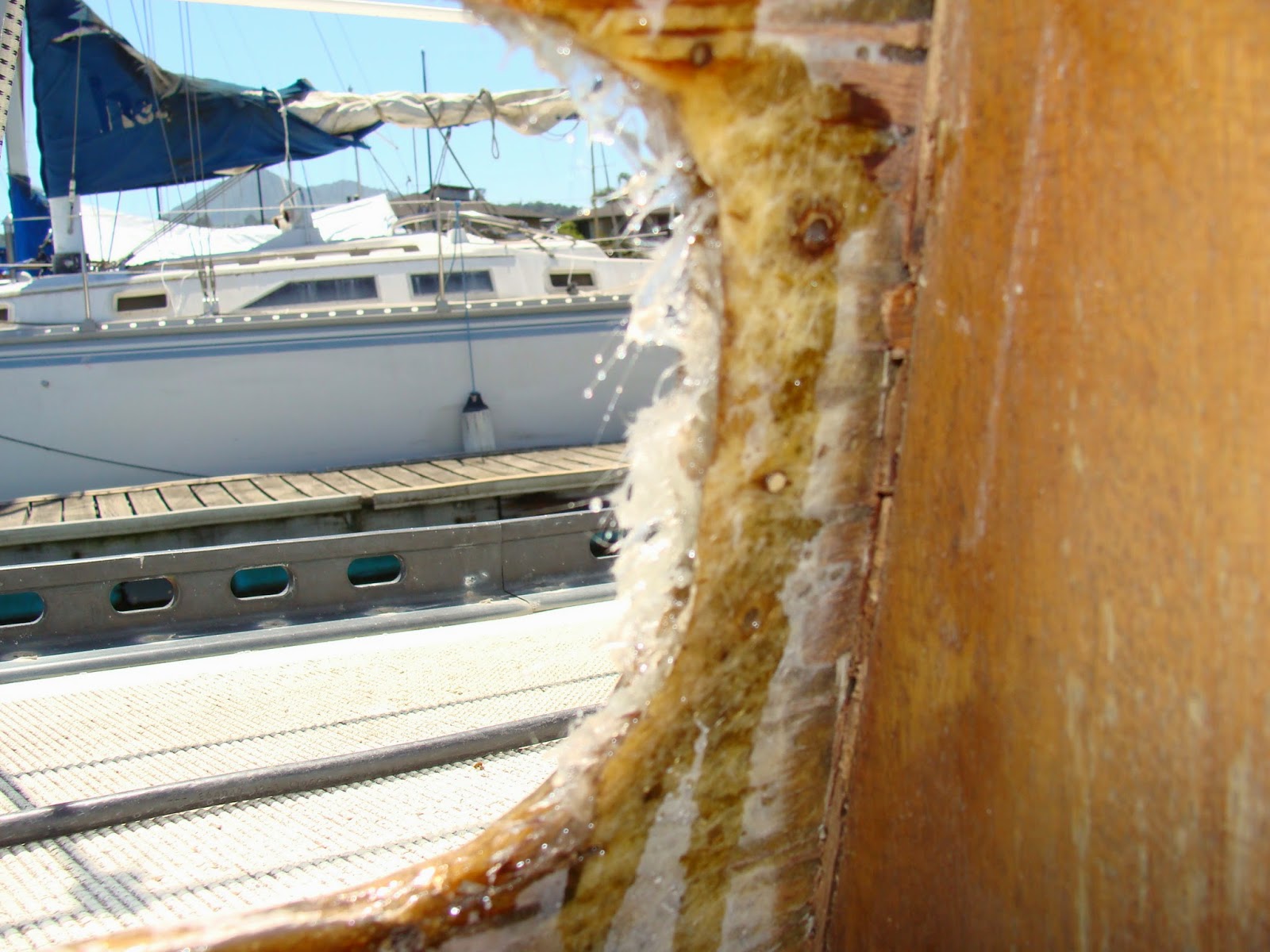 Forward of that, the gap in the delaminated glass was so big that I stuffed saturated glass cloth into the space. Clamping would have made the laminate too thin so stuffing and build-up was the strategy here. This is on the starboard side in the forepeak. 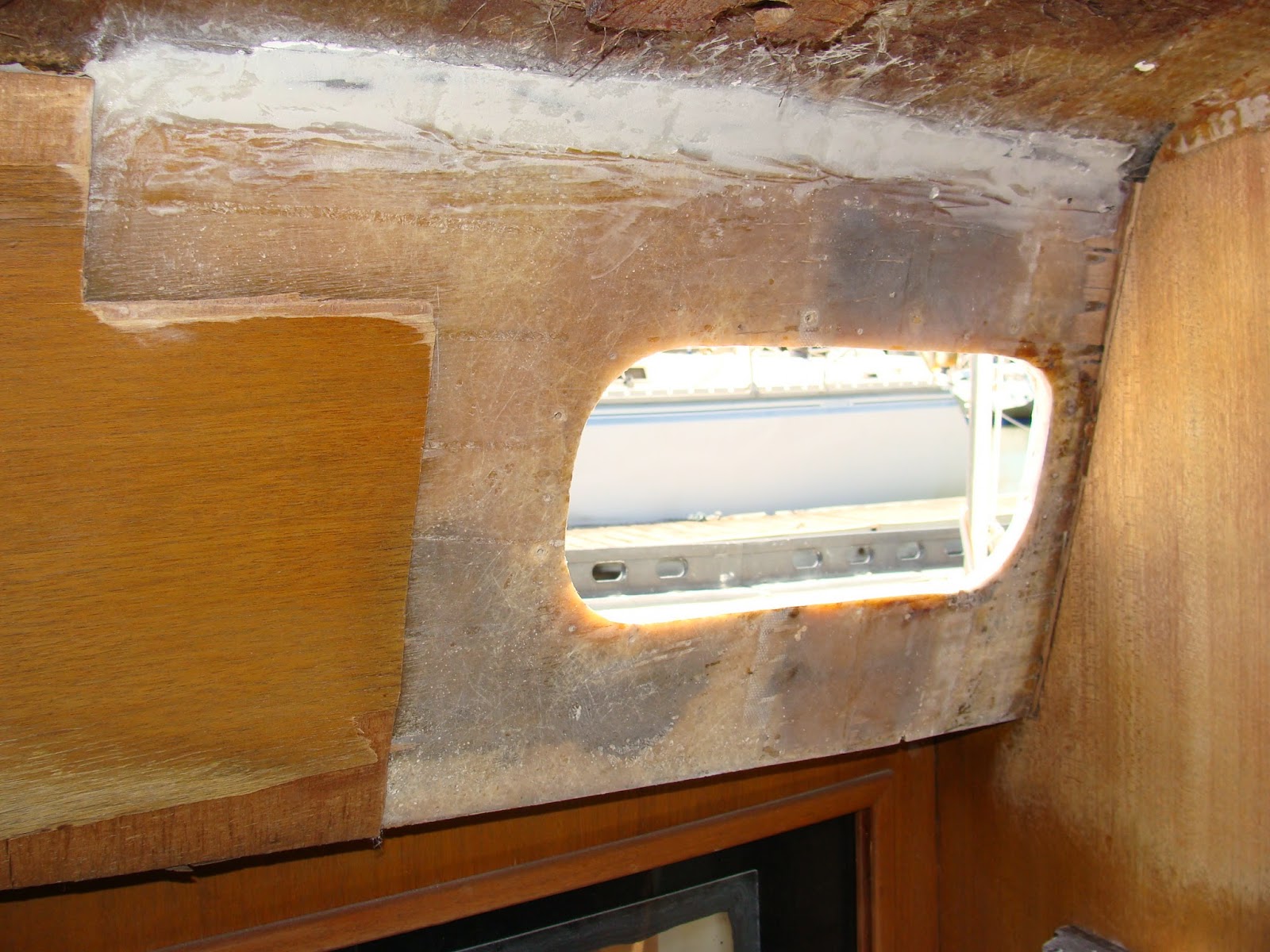 Here's the same port with the opening edge faired, the bad wood removed, and the bulkhead sanded, ready for glassing. Note how close the opening is to the bulkhead. There may not be enough room for the new port, so the opening needs to be moved forward some. 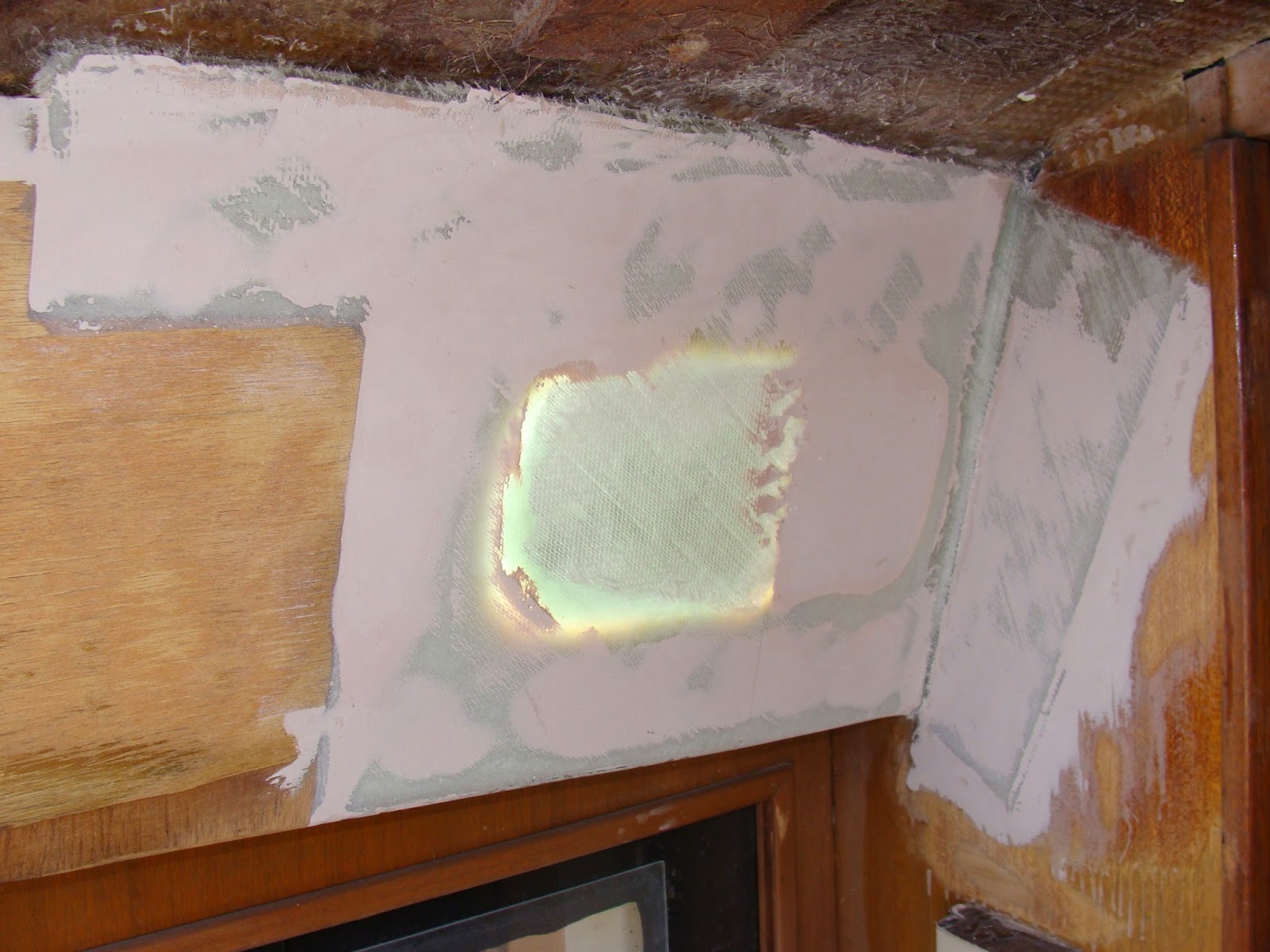 Same port finished, with tab to bulkhead. I got lazy cutting the cloth to fit the opening and just slapped it over. Of course, it gets cut out for the new port. 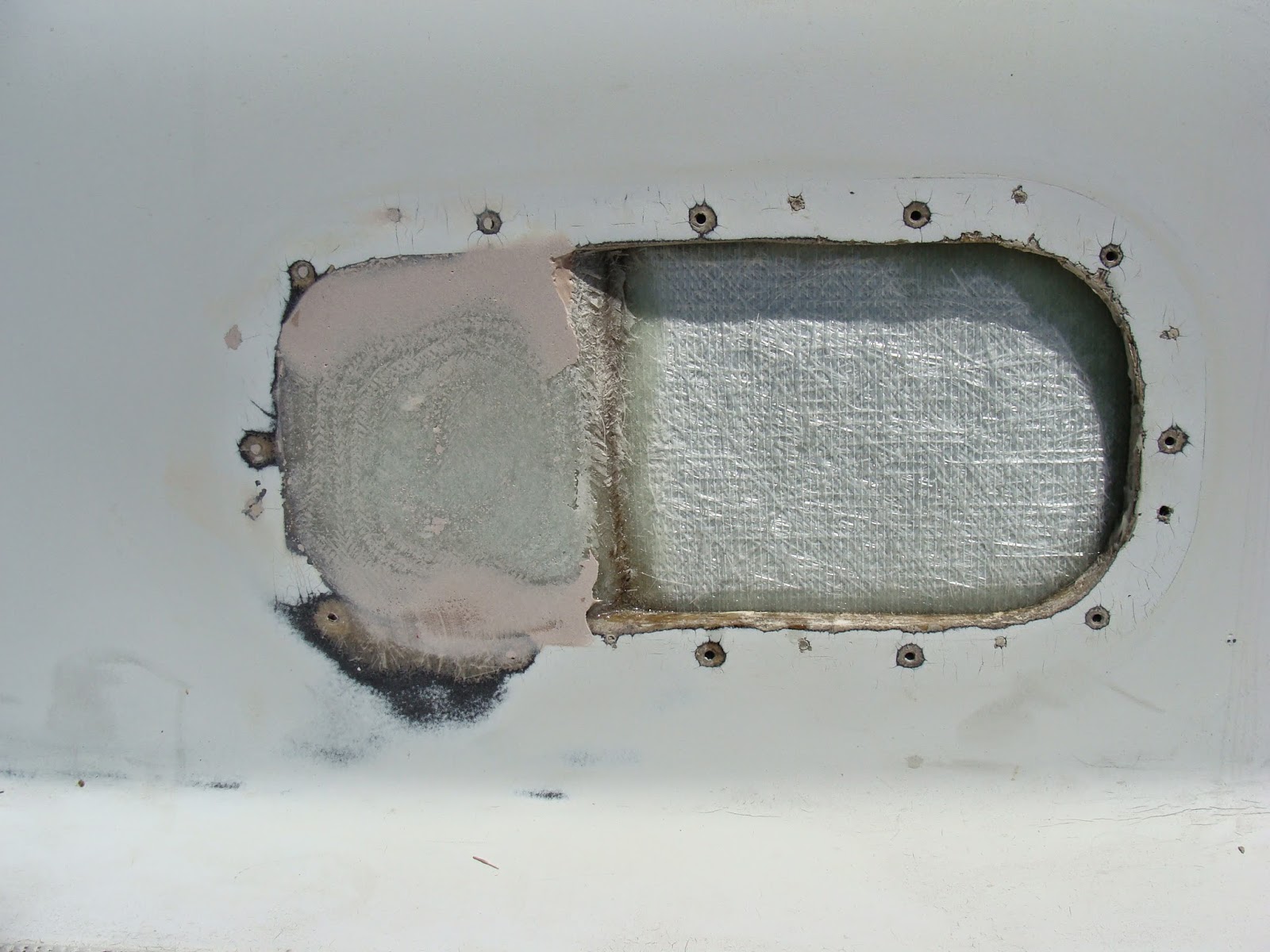 This is the exterior of the same port, built up with 14 layers of glass over the aft end so the cut-out for the new port can be further forward. 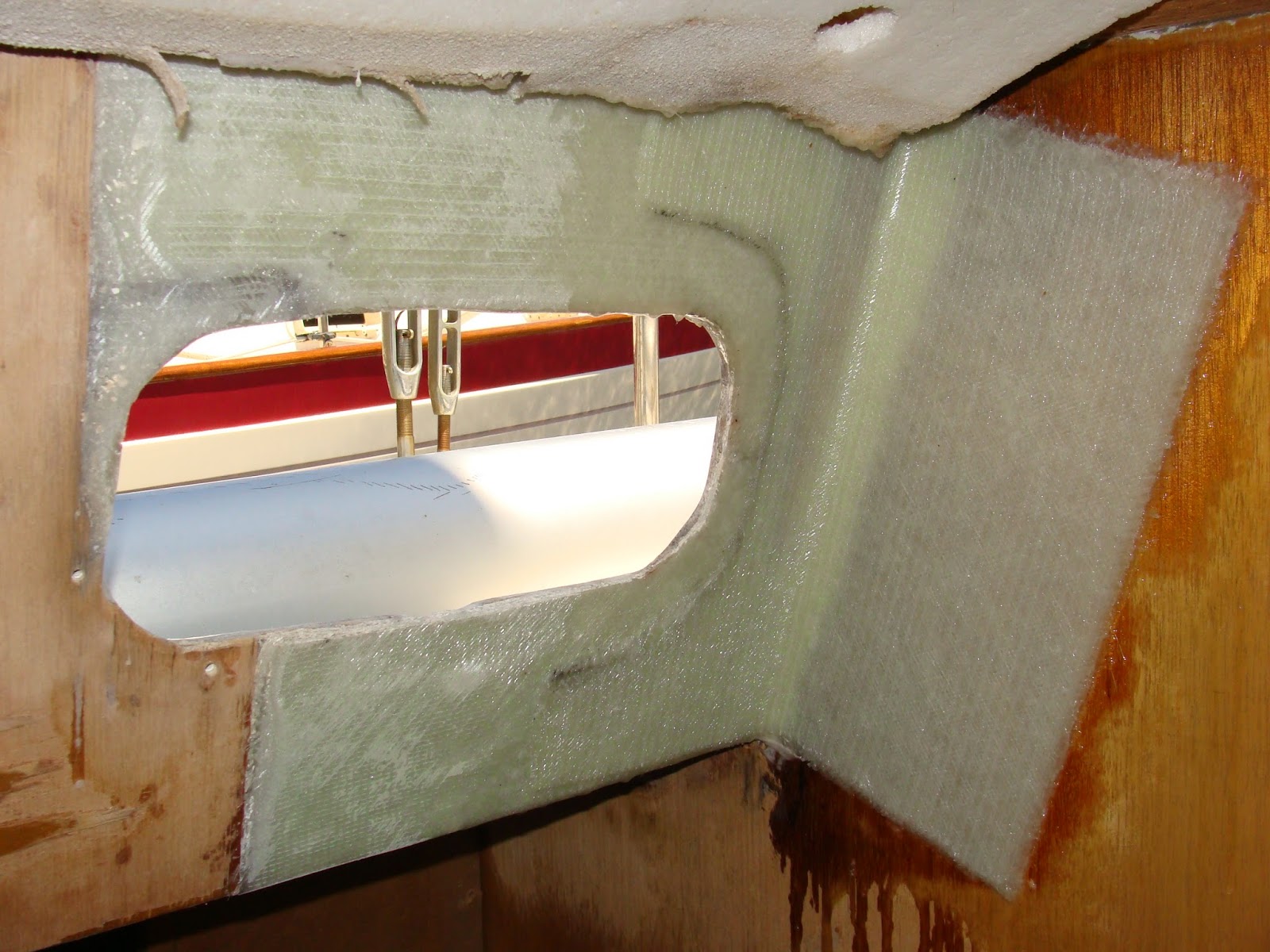 This looks remarkably similar, but is in the main cabin on the other side. There was a lot of damage in the wood above the port, presumably from a leaky cabin top hand rail mounting bolt. All these leaks were so small that I never saw any water collect anywhere but they did a lot of damage over time. 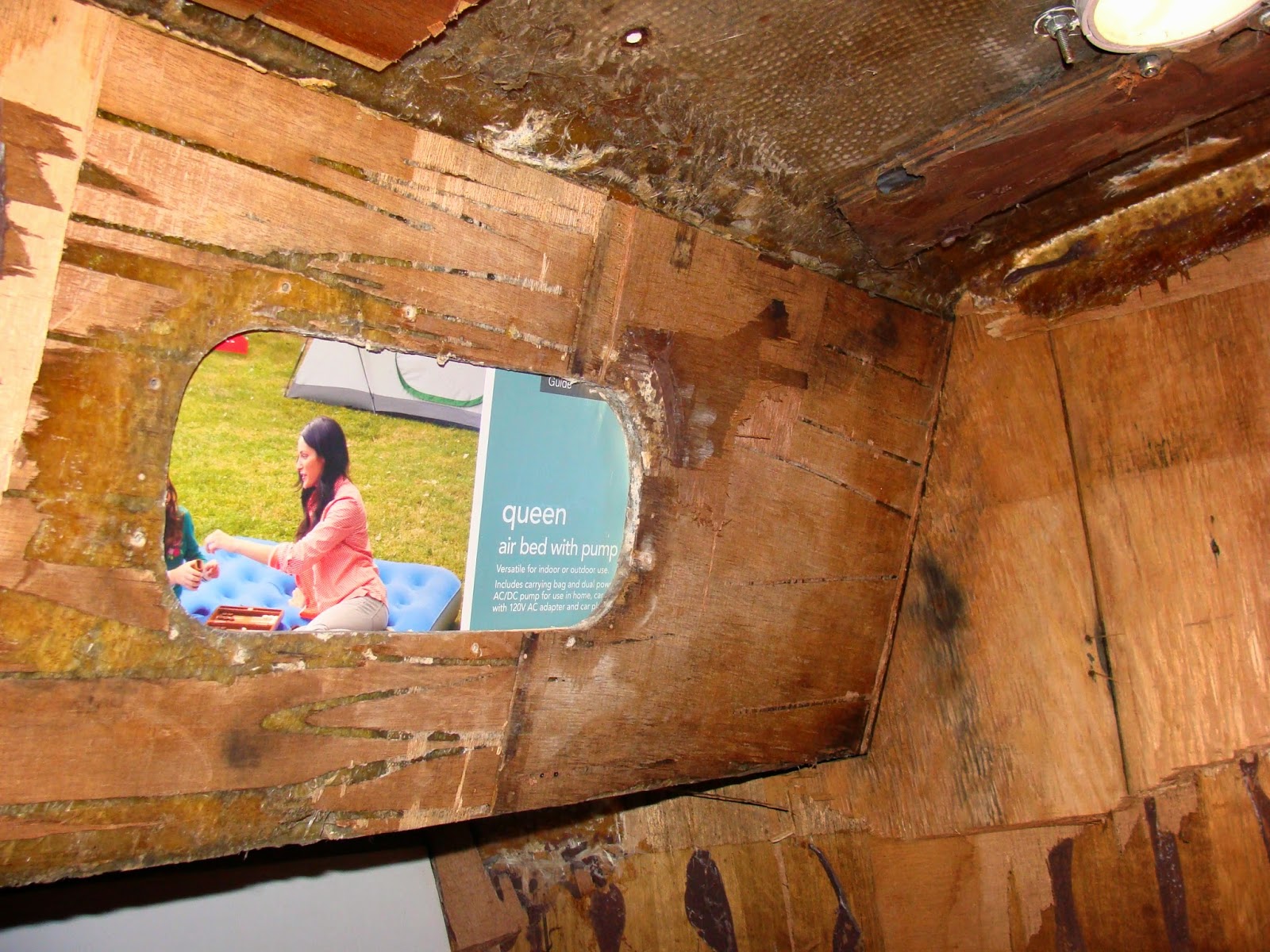 This is the fun one, in the head. The cabin top had old fashioned dorade vent boxes that were leaking when I bought the boat. Right after, I replaced the dorades with solar powered vent fans. I've checked when lots of water was coming aboard and when shooting them with a hose and have never seen a drop come through these solar vents. They are surprisingly waterproof. But the damage was already done. Note the scenery out the port has changed from marina to bucolic. 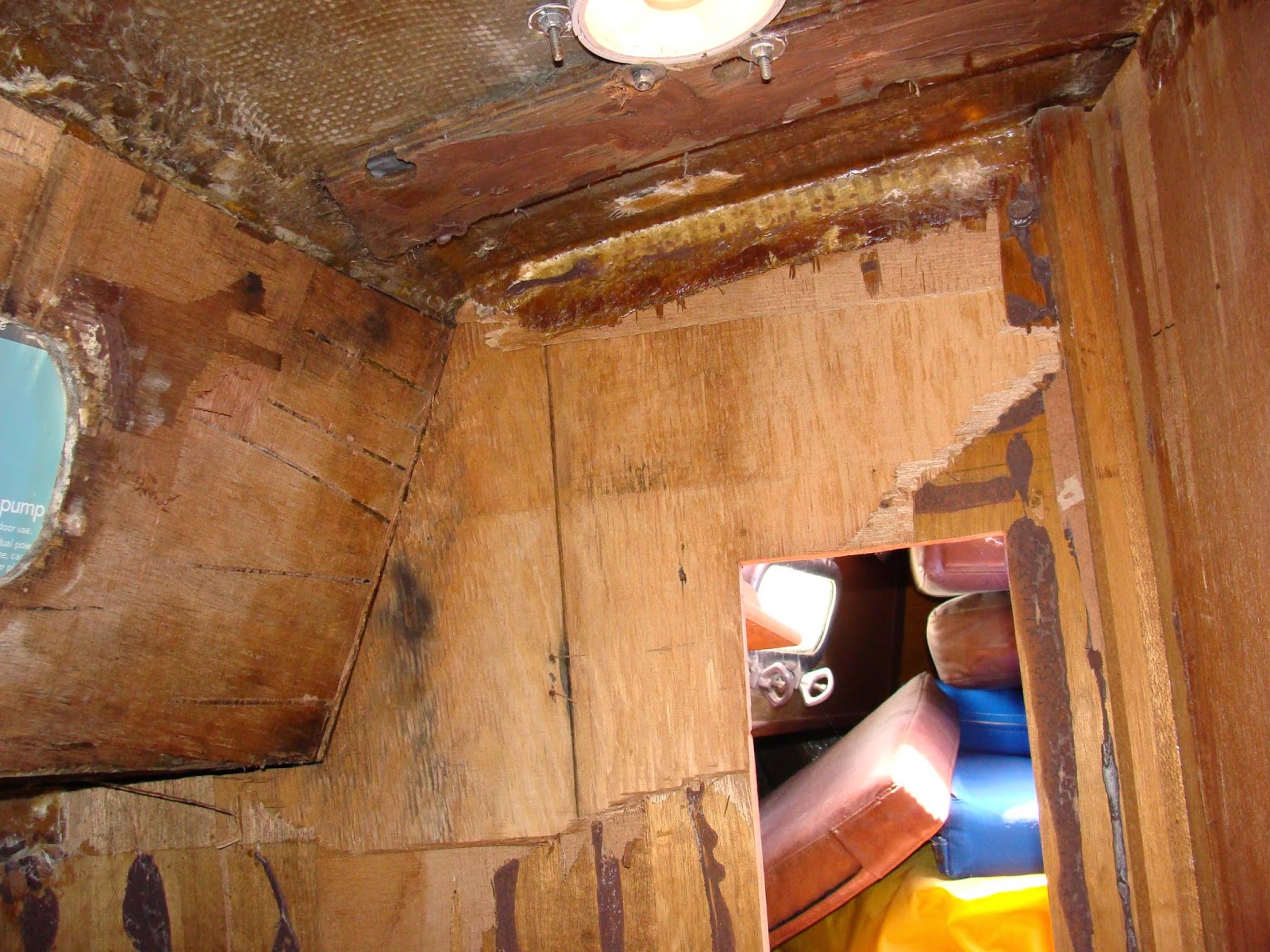 The water had run unseen above the headliner to the bulkhead and the wood around the port. The bulkhead was not sealed/secured properly so water got in on top of it. Lots of delamination and some rot. Here I'm in the process of removing the delamination and old tabbing. The square opening in the lower part of the picture used to house a propane heater for the forepeak. It will be filled with plywood. Right now it's a handy escape hatch to the forepeak, in case you really had to get out of there fast. 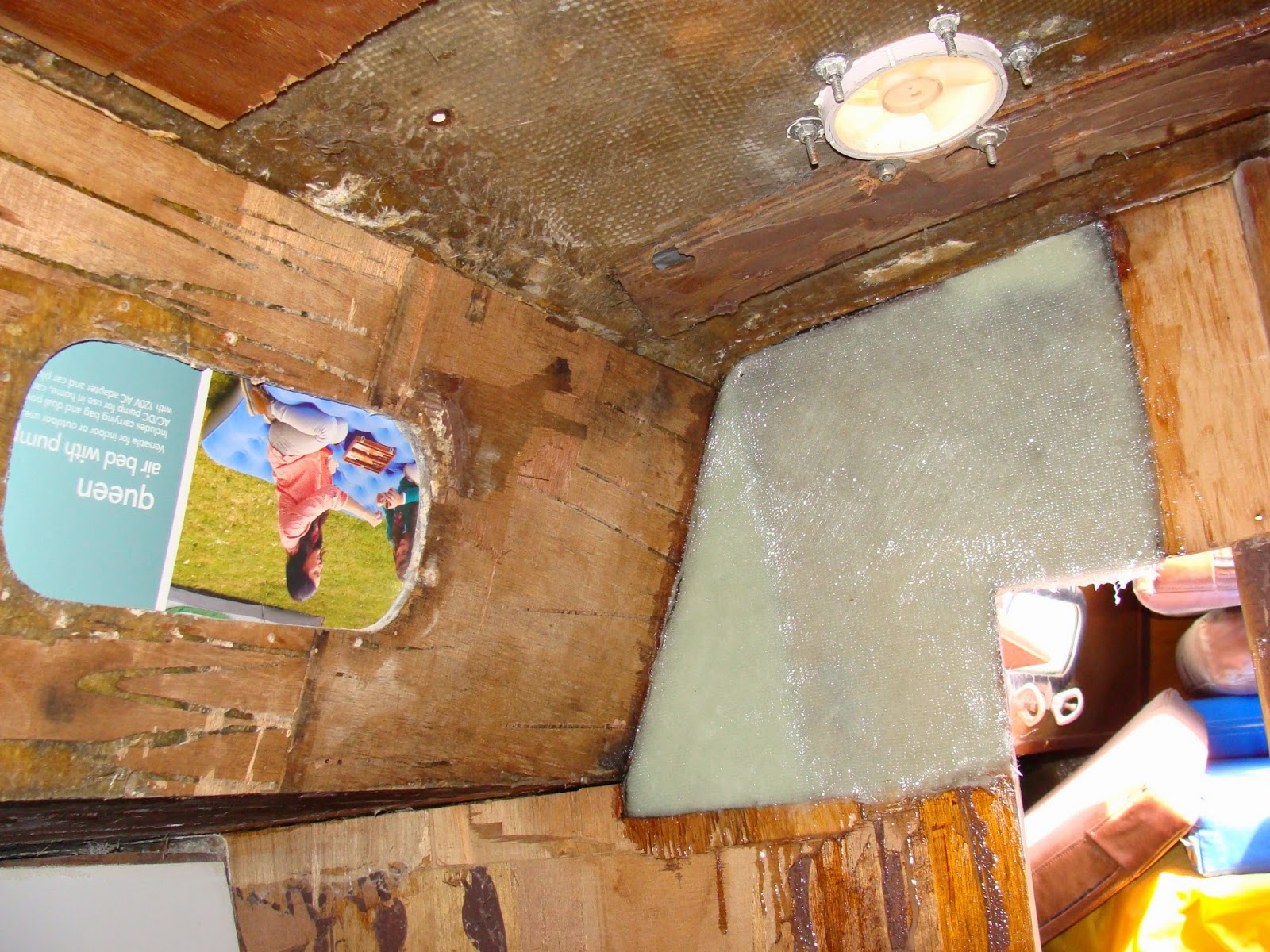 First 6 layers of glass going on the bulkhead to build back up to original strength and thickness. This bulkhead repair needs to be done now so the cabin trunk repair ties into the bulkhead tabbing structurally and visually after the paint goes on. Note the bucolic girl is now upside down. At least I hope it's her and not the boat. (The purpose of the cardboard is to block the sunlight. Since I'm inside the dark head compartment, without it I can't see the work area at all.)

So paint prep turned into other fun stuff. Five-and-a-half port openings done (not counting the big window layup) 2 1/2 more to go. Every day we make a little progress and the boat gets stronger. Laying, grinding, bondoing, sanding.... But right now I better be off to that Laminators Anonymous meeting.

Posted by Kuewa's Voyage at 5:48 PM No comments: