Beginning of Day 4. Lighter wind, slower sailing, 131 miles in the last 24 hours. Beautiful weather though. The Milky Way and meteors were amazing last night.
View the location or send a reply to Tony Hoff: https://us0.inreach.garmin.com/textmessage/txtmsg?extId=0fb26f19-e98c-45a4-956b-9ed2a394e2d4&adr=malukai82.kuewa%40blogger.com
Do not reply directly to this message.
This message was sent to you using the inReach two-way satellite communicator with GPS. To learn more, visit http://explore.garmin.com/inreach.

Still making excellent time. 1,784 miles to go. Beautiful sailing with sunshine every day. Got some good sleep the last 24 hours.
View the location or send a reply to Tony Hoff: https://us0.inreach.garmin.com/textmessage/txtmsg?extId=33e9f787-b7f1-45dc-8e49-f0d80c2ab76d&adr=malukai82.kuewa%40blogger.com
Do not reply directly to this message.
This message was sent to you using the inReach two-way satellite communicator with GPS. To learn more, visit http://explore.garmin.com/inreach.

Kuewa is flying. 184 miles first 24 hours. Windy, wet and cold last night and this morning. Gray dawn. Now sunny and the wind is backing off. All is well.
View the location or send a reply to Tony Hoff: https://us0.inreach.garmin.com/textmessage/txtmsg?extId=0420cbe1-22ae-4a34-8245-a0caa22324f2&adr=malukai82.kuewa%40blogger.com
Do not reply directly to this message.
This message was sent to you using the inReach two-way satellite communicator with GPS. To learn more, visit http://explore.garmin.com/inreach.

Light wind was the meteorological theme of Kuewa's sea trial, sailed Monday through Wednesday of this week. Had I known it would be that light out there, I probably would not have left the dock. I'm so glad I forged ahead, blithely optimistic, as usual. The desired mileage plan was ludicrous, given the conditions. But what is a mileage plan? Just numbers. What I received instead was the most amazing farewell to California waters from the cosmos.

Monday's fluky northerly wind pushed us, off and on, out past the Farallones by mid afternoon. There were many whales, seven different groups of them spouting and working. No breaches or other playing.

Way out past the Farallones, I was standing at the helm in beautiful sailing conditions when I noticed ahead some kind of buoy-looking thing, but it was sort of undulating and flashing a shiny reflection. Time passed and we seemed to close with it quickly. Eventually I determined that it was actually closer than I thought, a mylar party balloon. Blown off a cruise ship or something? It's speed downwind varied a lot. Sometimes it was slowed by its contact with the water, and then a wave would launch it into the air, helped by the helium, and it sped along, restrained only by its length of ribbon tied to a plastic toy, skipping along the water. It was a bit of work to try to intercept it, but it was Erin's birthday and a balloon seemed the right thing to bring aboard, especially considering the environmental issue. We (Kuewa helped a lot) succeeded in positioning just downwind of it as it accelerated and snagged in the starboard shrouds within my reach. 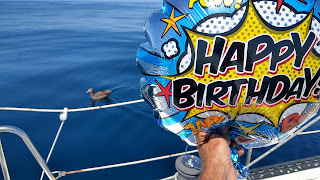 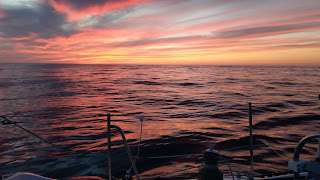 The northwesterly held until 10pm when we were near Gumdrop Seamount, then died completely. The water went glassy with undulating swells. The best tactic seemed to be to furl all sails, secure the boom against banging back and forth with the rolling, and get some sleep. At 2am I came on deck to a magical night. The sky was cloudless, a mass of stars with the glowing band of the Milky Way from horizon to horizon. It was so quiet and the whales were spouting all around. There were also some small fish trying to escape their predators and would boil to the surface in a glowing mass of bio-luminescence that mingled with the refection of the stars. We were suspended in sparkly space.

At dawn it was still glassy and we were joined by four albatross, Robert, Mira, Caddie, and Rory. They were around most of the day, paddling to keep up with our drift, occasionally flying off. Each time they left, I thought they had moved on but a while later they would return, one at a time, execute one of their ski landings and paddle up to the stern again. 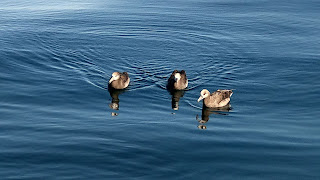 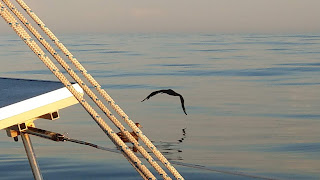 Rory flew around a lot.

At one point, a 6-foot shark came slowly towards us, its swimming pattern and speed indicating some sort of problem. It was going too slowly and there was some seaweed trailing from its dorsal fin. Several times it swam right under the four albatross, nearly touching them. The albatross behavior was interesting. They arched their necks, tilted their heads and looked down at the shark as it passed but showed no excitement or perception of any danger. I could now see that the shark had a severe entanglement wound, likely from some monofilament fishing line that was embedded around its torso a long time ago. The tissue was in bad shape. Entanglements are affecting everybody out there. I think it was checking to see if Kuewa was a dead whale that it could feed on, and checking if the birds might somehow be digestible. 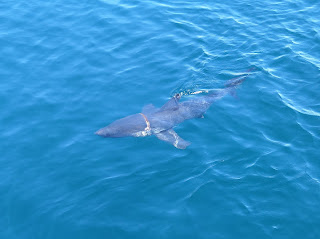 The whales were a constant presence. I think they were all humpbacks, feeding deep down on the seamount, on the schools of squid that were drawn there by the nutrient-rich currents around it. These whales were working so hard that there were no breaching or tail displays. They would surface and take three long, deep breaths, and dive for a long time. There were enough of them around, though, that there were almost always some on the surface. A couple of times they came over to check us out. 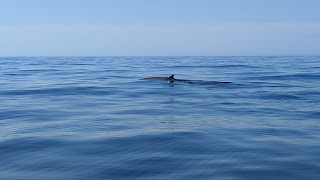 There were also many mola mola (sunfish) around. Picture not very good, but you can see the weird shape, upper middle. 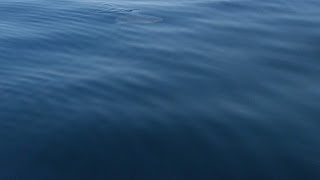 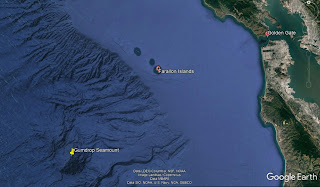 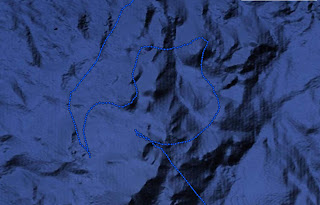 After 16 hours of absolute calm, we had drifted in a rough circle, sort of around the seamount. At 2:30 pm, a fresh southwesterly came along and we rushed off to the south, leaving the Gumdrop party behind. It was nice to be sailing again, but sad to leave all our new friends. Just before 9pm (Tues.), we were 75 miles due west of Santa Cruz, and we tacked back to the north northeast. The wind went light and sporadic from the southwest until about 10pm again, then tapered off completely. Once again, sails furled, AIS collision alarm and VHF radio on, and off to bed. This time I slept solidly for 5 hours.

When I awoke at 3:30, there was an 8 knot northwesterly blowing. Kuewa was pointed directly at San Francisco. The tracker showed that she had been pointing that way for 5 hours and made 5.5 nautical miles towards home. She's good at watch-standing all by herself.

The moon had set, the sky was cloudy and it was very dark. We made sail and the wind pushed us along nicely, up over the Continental Shelf. The dawn was spectacular. The water began to boil again with bait fish being chased by something below. There were huge patches of this for several miles. We sailed right through one of them, and the water turned black with their bodies, but they were too shy, both predator and prey, to be close enough to see how big they were or what they looked like. There were some sea lions nearby so they were at least part of the fun.

The wind died again at 8am. The AIS alarm went off and showed a target, “Ocean Defender”, only 2 miles ahead on collision course. I couldn't see anything at first, but then could just make out a tiny craft, like a very small fishing boat.

As we slowly came closer together, I could see that the sole occupant was paddling towards Kuewa. I thought it was a fisherman in distress and would need a tow. He eventually paddled up to within conversation distance and introduced himself as Antonio de la Rosa, from Spain, having left San Francisco three days earlier to be the first to “paddleboard” to Hawaii. That's in quotes because his vessel is a small version of one of those boats you see that set rowing records across the ocean, with a pod forward big enough to crawl into, another enclosed storage space aft, and low amidships for reaching the water. Instead of rowing, though, he was definitely stand-up paddling the thing. Wow! We had a long conversation in his broken English. He estimates 60 to 90 days. I think about that and Kuewa is so luxurious by comparison. What a feat! When I head off to Hawaii, my shore team will send me his position from his tracker. I'll see if it makes sense to stop by and see if he's OK. He may be a lot further south than I want to go, though.

Antonio is no crackpot. Here's the English version of his website: https://www.antoniodelarosa.net/pdf/Pacific-SUP-Challenge-EN-dic2018.pdf

I'm looking forward to shaking his hand when he steps ashore in Hawaii in late summer or early fall.

Shortly after this amazing encounter 30 miles west southwest of Half Moon Bay, the wind finally returned, this time from the south southeast. The whales were still all over the ocean. In this area though, they were breaching, and tail-slapping, trying to make as much noise as possible. It sounded like artillery fire as they pounded the water. Sometimes it sounded as though two of them 5 miles or so apart were trying to out-boom one another. I wonder what their motivation is. So much we'd like to know about these incredible critters. Unfortunately, this behavior was all too far away to get pictures.

Then, of course, some dolphin sped by for a visit and briefly played in Kuewa's bow wave. They were working too, chasing down some breakfast. 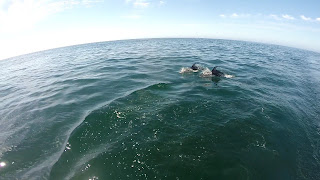 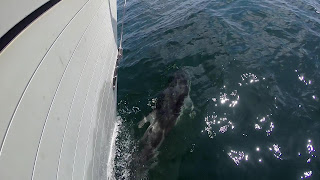 The wind continued to build throughout the day from the south southeast up to about 15 knots. Kuewa rushed back to the Bay with the genoa poled out to starboard. After some very boisterous conditions under mainsail only, with the wind in the mid 30s from the Golden Gate all the way to San Rafael, we tied up in her slip at 6:20pm. What a fun 3 days!

This sea trial didn't test everything to the limit, but I found some improvements that need to be made. I'll be working on those and completing the provisioning for the next 7-10 days. I'm hoping departure will be sometime during the last week of June.

Thanks for your interest!
Posted by Kuewa's Voyage at 12:20 PM 4 comments:

The wind finally returned at 1430 and we've been charging along on a beautiful westerly. 16 hrs @ Gumdrop Seamount was very interesting. Amazing sea life!

Posted by Kuewa's Voyage at 7:02 PM No comments:

Sea trial has taken an unusual turn. It's been flat calm out here at Gumdrop Seamount for 14 hours. So far choosing not run engine.

First half day of Kuewa's sea trial, all aboard is well. 58 miles sailed so far, not bad considering we were becalmed for some time.