I don't know why I so much dread the sanding. It only takes a minute.

Posted by Kuewa's Voyage at 4:05 PM No comments:

Yes, really - professional. When Mike got fed up with the defense electronics engineering contracting world several years ago, he took a break and worked on boats in Sausalito for a living. That makes him a professional. One of the tasks was applying the varnish to wooden hulls on classic boats. The boat owners were very finicky and the owner of the business was so particular that the workers were not allowed to know the formula for the varnish/solvent they used. The manager would bring the blend out of a back room and hand it to the workers.

The plan worked. Mike cleared his head, and the fortunate defense electronics engineering world now has Mike back. Although Mike's painting skills are exemplary, the security of our country benefits greatly from Mike's intelligence. (Discussions with Mike about work are always brief - he is never able to tell us anything about what he's working on). I'm just happy Kuewa benefits as well!

Mike's Saturday tipping looked really nice, but he wouldn't let me call it quits after that coat. He was dissatisfied with a couple of areas with a slight sag. 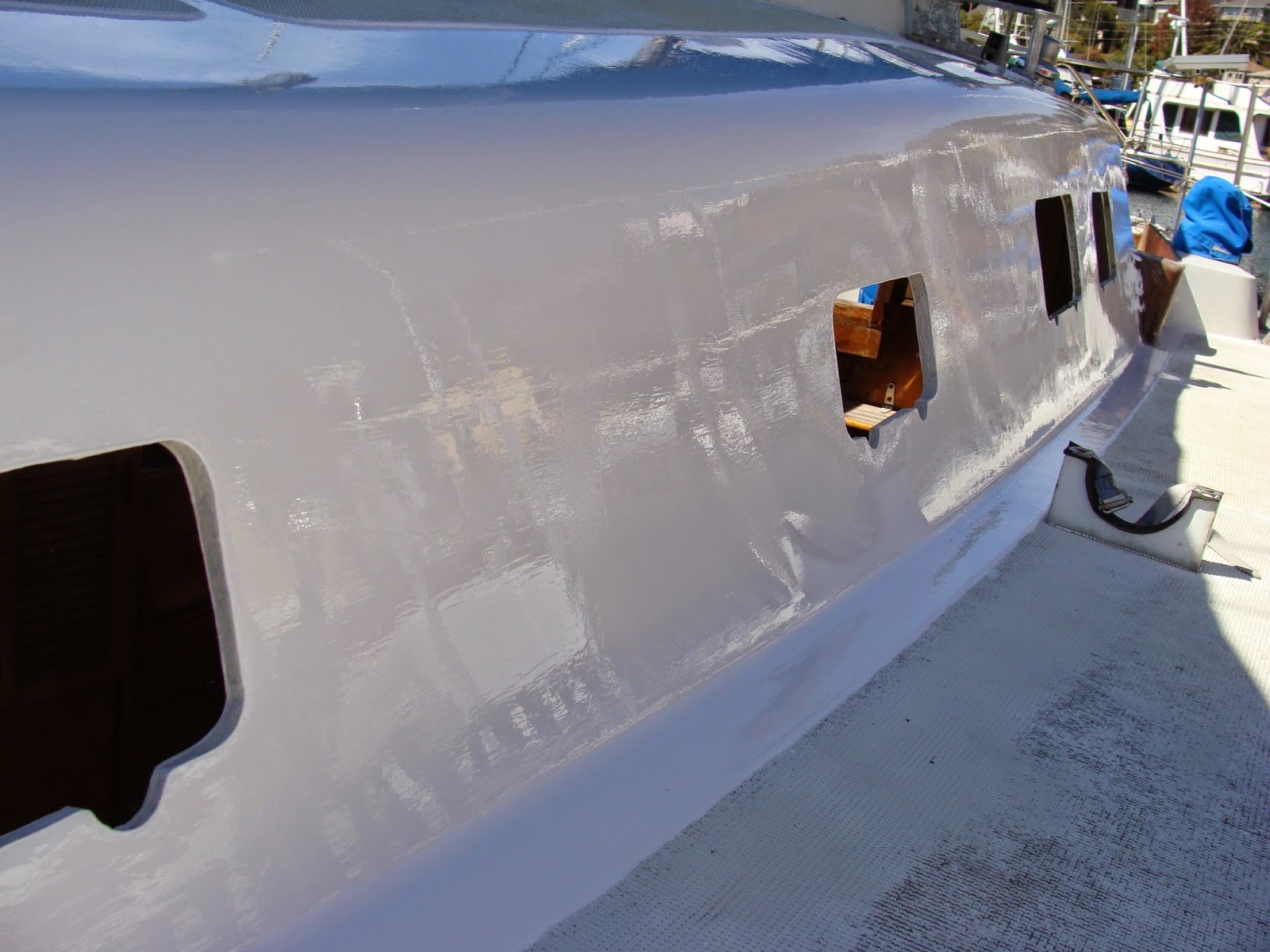 This is how it looks after I applied finish coat #4 today. It passes the 4-foot test, but probably not the 3-foot. Meaning you see lots of brush streaks at 3 feet. I'll sand this again tomorrow and Thursday (about 9 hours with the sanders) and Mike and I will apply the final coat Saturday. I bought Mike (well, I guess Kuewa) a $35 paint brush for that final tipping.

We will probably not eliminate brush streaks altogether. If it's possible, I certainly don't have the skills. Mike probably would given enough time at it (this paint behaves differently than his varnish). Kuewa is a sailing boat, not a boat show boat, so with 9 layers of UV protection, I'm happy with the look we've got here. Besides, pretty soon the birds crap all over it anyway.

Posted by Kuewa's Voyage at 3:48 PM No comments:

We had great fun in the Jazz Cup on Saturday and won our division! The Jazz Cup is a 28 mile race from Treasure Island at the Oakland-San Francisco Bay Bridge to Benicia, a few miles up the Sacramento River. It's a spinnaker run just about the whole way with a boisterous gathering at the Benicia Yacht Club. There were 110 boats that finished.

We were racing Tom Faraola's new-to-him Santa Cruz 27 Rio. There were 5 of us aboard: Tom and his girlfriend Kristi, Nick and his wife Patty, and me. Tom and Kristi and I had sailed the boat once and flew one of the spinnakers for a while a couple weeks ago. No one had even seen the sails we had up during the race (they were beautiful sails).

We made a couple of mistakes early in the race but recovered very well, catching up and passing many boats, including the one other Santa Cruz 27, after both mistakes. We worked well as a team and had excellent boat speed. If you must know, the first mistake was being about a minute late for our start because of a last-minute headsail change to better handle the building wind. We were pretty quick and got the change done in time but the commotion distracted the skipper and we got too far away from the starting line.

The second mistake was even worse. There is a buoy off the Chevron dock in Richmond to keep racers from getting too close to the potential tanker operations there. We didn't know where it was and followed a group of boats that over-shot the lay line to the mark with the building flood current. The result is that, as we got closer and closer to the mark, we were forced to head higher and higher as the current set us down faster and faster until we finally backwinded the spinnaker just before the mark and had to fall off before rounding. The other boats ahead of us were able to just squeak around the mark. We couldn't believe the blunder! It took 5 minutes to quickly get the spinnaker down, hoist the jib, tack back up against the current, round the mark, reset the spinnaker, and drop the jib. There was some consolation in that one full-race big boats right behind us did the same thing.

But it was great fun! There is no time for photos when racing a small boat with 5 people aboard so I have nothing pictorial to post. We had a beautiful sail back yesterday, all close-hauled. We laid in about twenty tacks to get home in 5 1/2 hours.