Another trip out to the Kaneohe house in October 2016 to sail the little Venture 17 on the bay, and take a couple of kite boarding lessons at Kailua Beach.


If the box above doesn't have the video, you can link to it directly at YouTube here:  https://www.youtube.com/watch?v=kds3y4t13G8&t=186s

In early November 2015 I went out to the Kaneohe house to rebuild the pier in order to accommodate a new-to-us Venture 17. The boat also required some re-rigging and a rudder modification. I was hoping to get in some sailing as well but that was not to be this time. The work turned out quite well, though.


If the box above doesn't have the video, you can link to it directly at YouTube here:
https://www.youtube.com/watch?v=OTEFFhNGq4k
Posted by Tony Hoff at 12:54 PM


On October 24, 2014, I flew from San Francisco to Bora Bora to help Hawaii friend, Bill Leary, sail his Beneteau 351 MOKU PE'A from Bora Bora to Kaneohe. It was a wonderful 2,500 mile passage and a great break from the projects at a time when Northern California turned cold and rainy.

I made a video that captures the essence of the trip. If the box below doesn't have the video, you can link to it directly at YouTube here:  https://www.youtube.com/watch?v=DjfYNkYfKP0

You can also read Bill's entertaining and very well written journal entries from his 7-month cruise from Hawaii to Tonga to French Polynesia, including an 11-day passage eastbound from Nuku'alofa to Raivavae, and eventually back to Hawaii here:  http://mokupea.blogspot.com/2014_03_01_archive.html

We had great fun in the Jazz Cup on Saturday and won our division! The Jazz Cup is a 28 mile race from Treasure Island at the Oakland-San Francisco Bay Bridge to Benicia, a few miles up the Sacramento River. It's a spinnaker run just about the whole way with a boisterous gathering at the Benicia Yacht Club. There were 110 boats that finished.

We were racing Tom Faraola's new-to-him Santa Cruz 27 Rio. There were 5 of us aboard: Tom and his girlfriend Kristi, Nick and his wife Patty, and me. Tom and Kristi and I had sailed the boat once and flew one of the spinnakers for a while a couple weeks ago. No one had even seen the sails we had up during the race (they were beautiful sails).

We made a couple of mistakes early in the race but recovered very well, catching up and passing many boats, including the one other Santa Cruz 27, after both mistakes. We worked well as a team and had excellent boat speed. If you must know, the first mistake was being about a minute late for our start because of a last-minute headsail change to better handle the building wind. We were pretty quick and got the change done in time but the commotion distracted the skipper and we got too far away from the starting line.

The second mistake was even worse. There is a buoy off the Chevron dock in Richmond to keep racers from getting too close to the potential tanker operations there. We didn't know where it was and following a group of boats that over-shot the lay line to the mark with the building flood current. The result is that, as we got closer and closer to the mark, we were forced to head higher and higher as the current set us down faster and faster until we finally backwinded the spinnaker just before the mark and had to fall off before rounding. The other boats ahead of us were able to just squeak around the mark. We couldn't believe the blunder! It took 5 minutes to quickly get the spinnaker down, hoist the jib, tack back up against the current, round the mark, reset the spinnaker, and drop the jib. There was some consolation in that one full-race big boat right behind us did the same thing.

But it was great fun! There is no time for photos when racing a small boat with 5 people aboard so I have nothing pictorial to post. We had a beautiful sail back yesterday, all close-hauled. We laid in about twenty tacks to get home in 5 1/2 hours.

In my last post, I mentioned a small kitchen cabinet project. Those of you who know me well know that my projects can drag on a bit. Those of you not aware of this but reading this journal are certainly starting to suspect.

Our small kitchen has very humble 1973 cabinets. Some day, they will likely all be replaced. In the mean time, I have been trying to supplement storage space. Shortly after moving in, I got a combination microwave/range hood to get that piece of equipment off the counter. 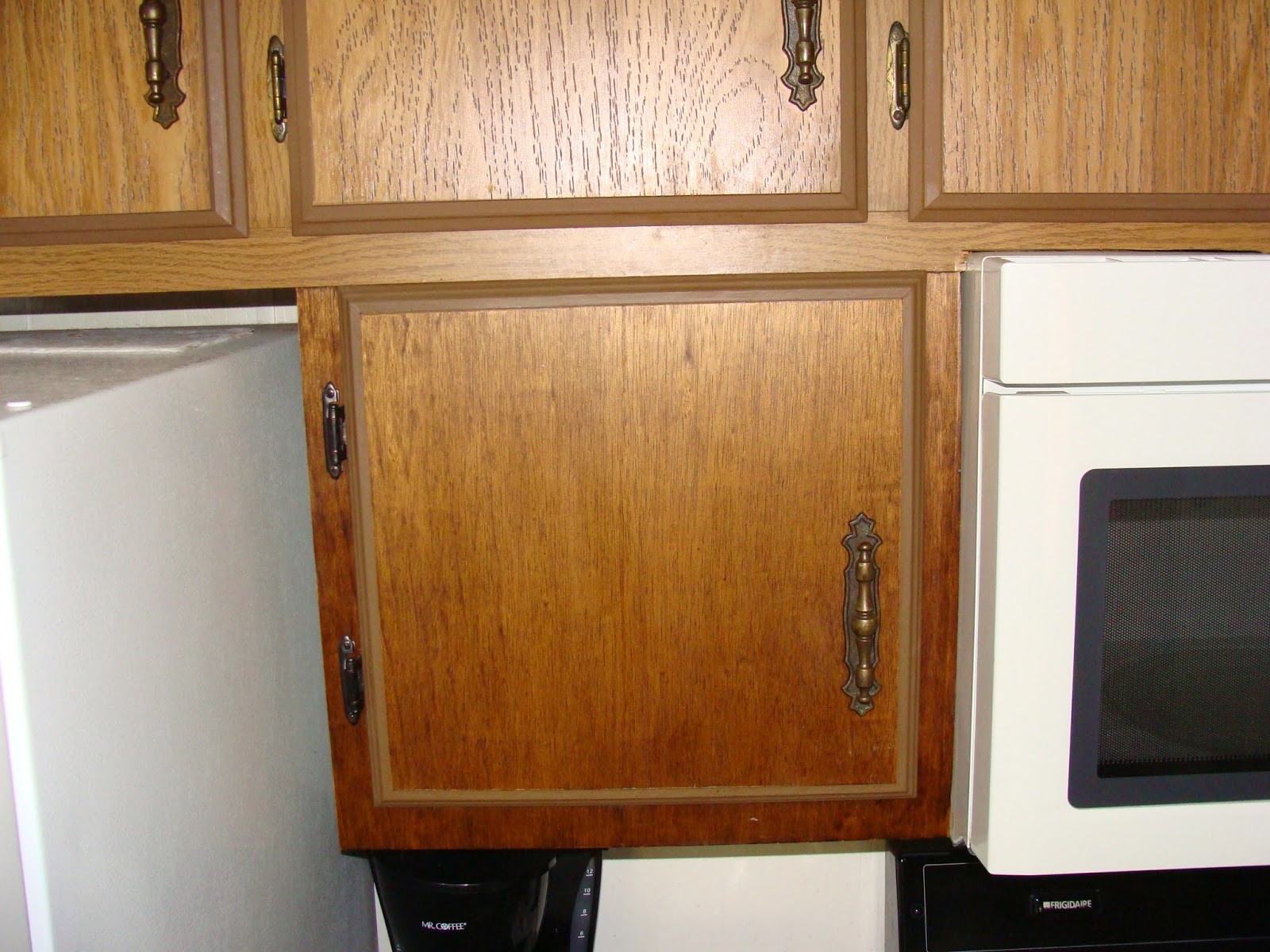 To use the space between that and the refrigerator, I built a small cabinet that kinda sorta matched the color and wood grain. The door frame molding is a near-perfect match. Unless you really look, you don't notice it's not original.

Over where the pantry is, there was a lot of wasted space up top, so I knocked out the paneling, built a cupboard bottom, and we put stuff there. 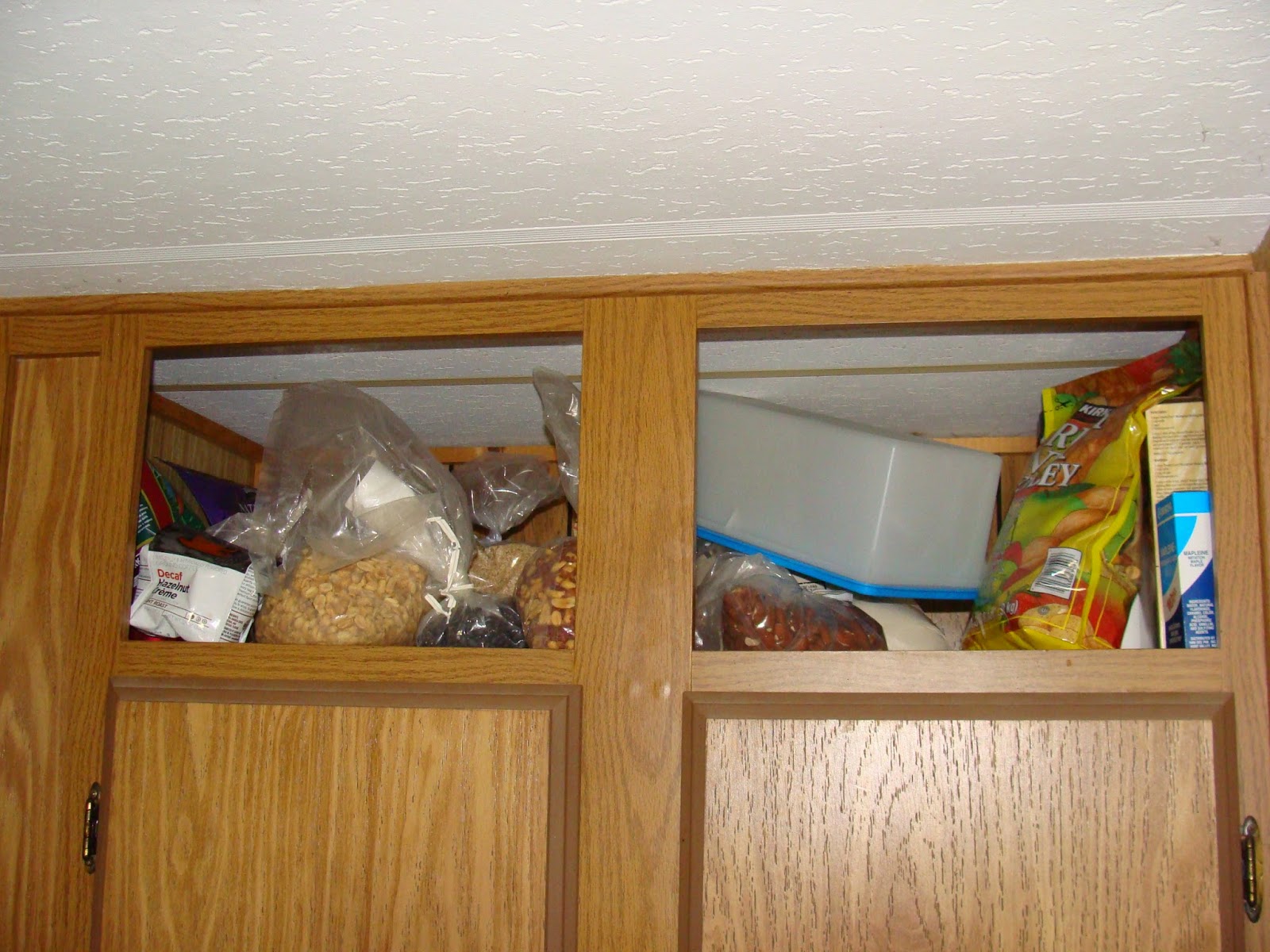 It looked like this for almost a year. The plan was always to make doors like the other one, but this time I could not find the right frame molding anywhere. Months passed. Last March, I gave up and took another door in to a cabinet shop and told the nice fellow to make two new ones like this with these dimensions. He quoted $120. 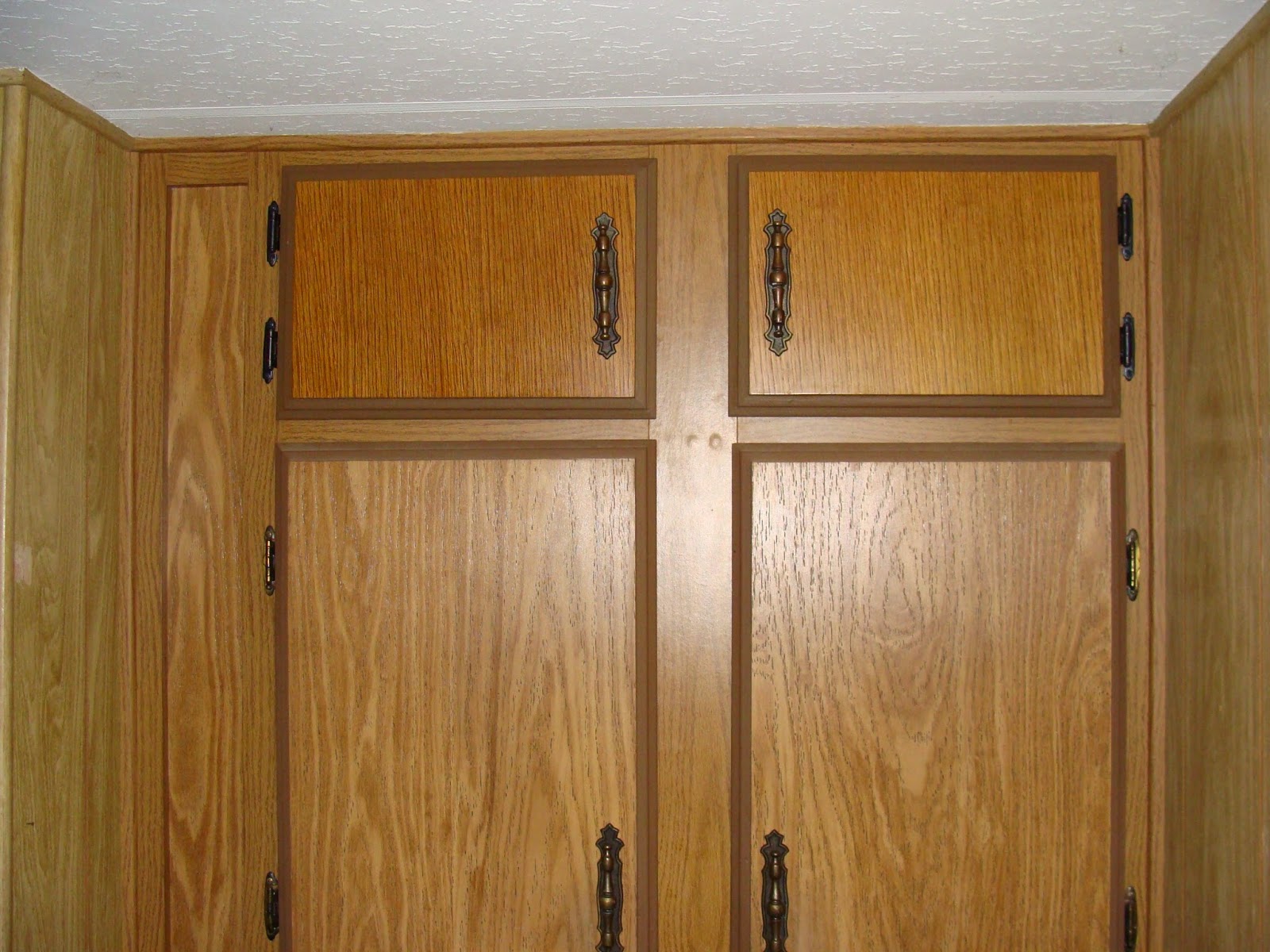 Ta-da! Five months and $30 higher cost. If you've got a construction project or are about to buy a new car and want a crack negotiator to help, I'm here for you. I knew this MBA would come in handy!


Yesterday I finally put the last coat of paint on Kuewa's interior cabin side and the cabin trunk exterior now has 3 coats of primer. Onward and upward.


Fun in the Sun

I took several days off from sanding and painting for the Port Joslin Rendezvous, an annual gathering at Terry and Vicki Joslin's Bel Marin Keys home on the lagoon. This was the 14th year of the gathering and the first one that had none of our big boats there. Instead we raced Lasers and a Sunfish, raced kayaks, played some yard games, and had a wonderful BBQ. 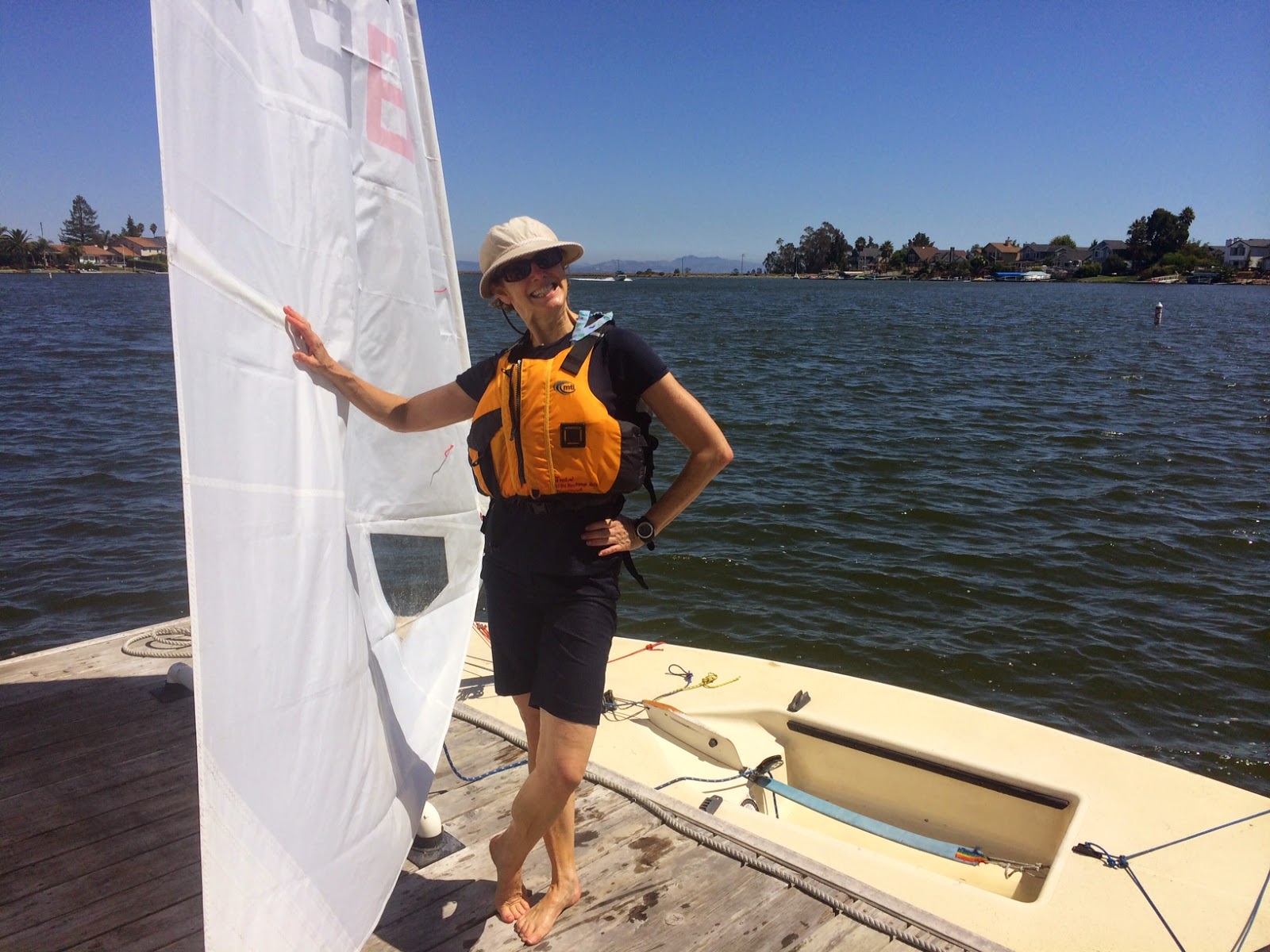 Susan about to set out on her fateful voyage (5 capsizes). 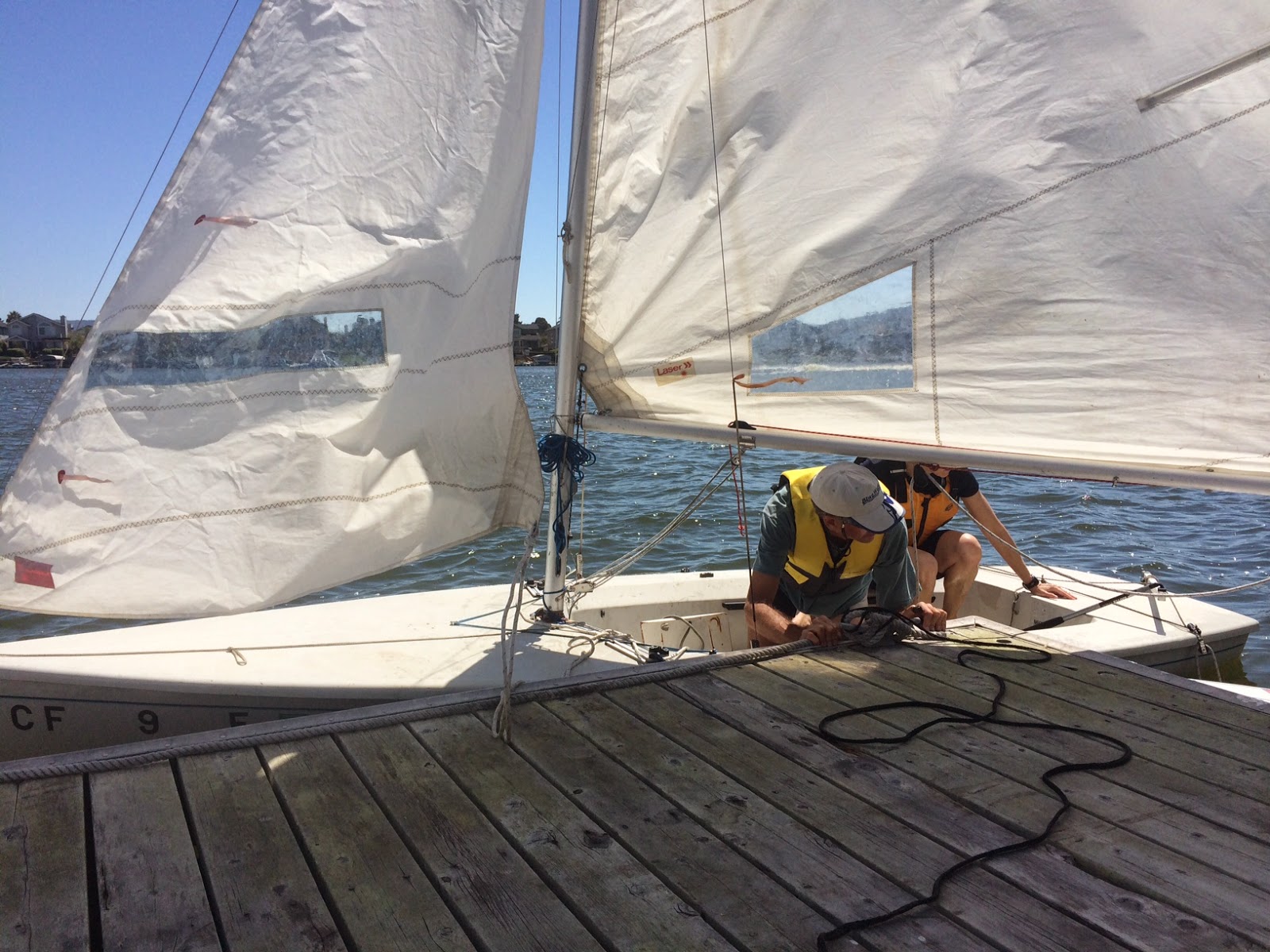 Tony and Susan about to set out on their fateful voyage (dismasting). Unlike most Lasers, this one has a jib and wire rigging. It was great fun until the port shroud broke and the mast toppled into the lagoon. I was hiking out at the time and went over backwards into the drink. We sailed back to the dock under jury-rigged jib (me holding it up) with Susan's expert helmsmanship. 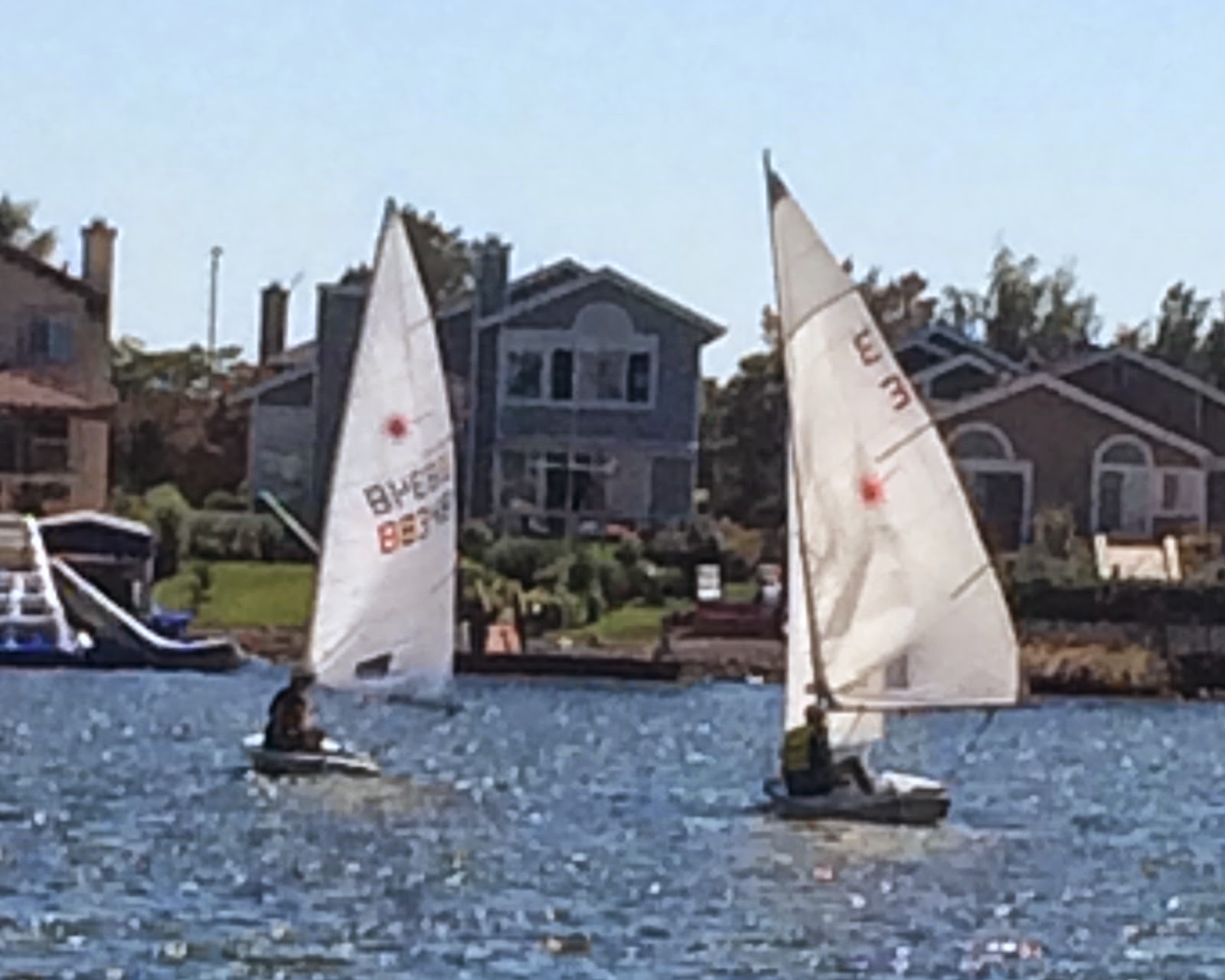 On the race course. Susan (on the left) is way better trimmed than I am. 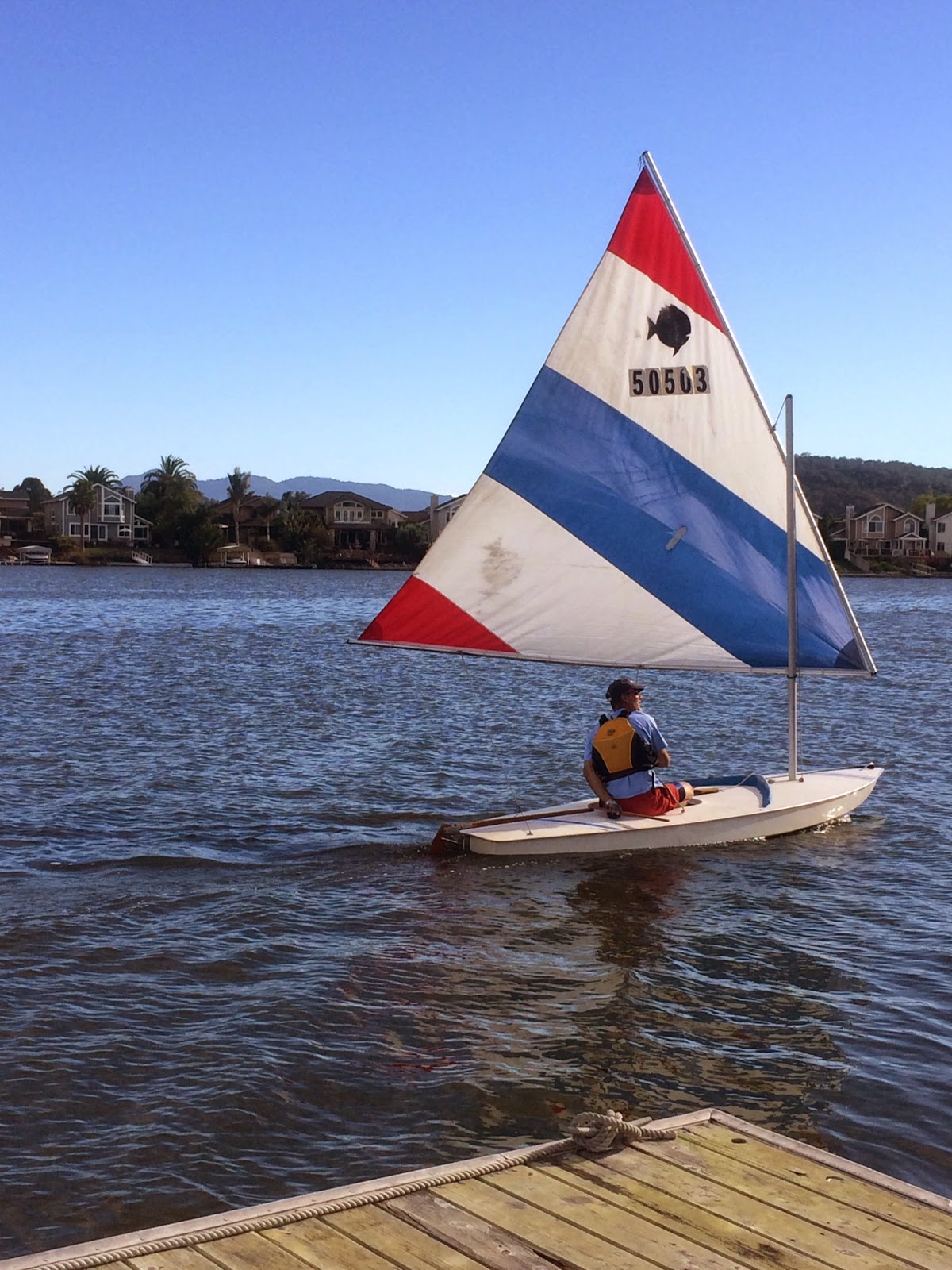 Sails drying in the yard. 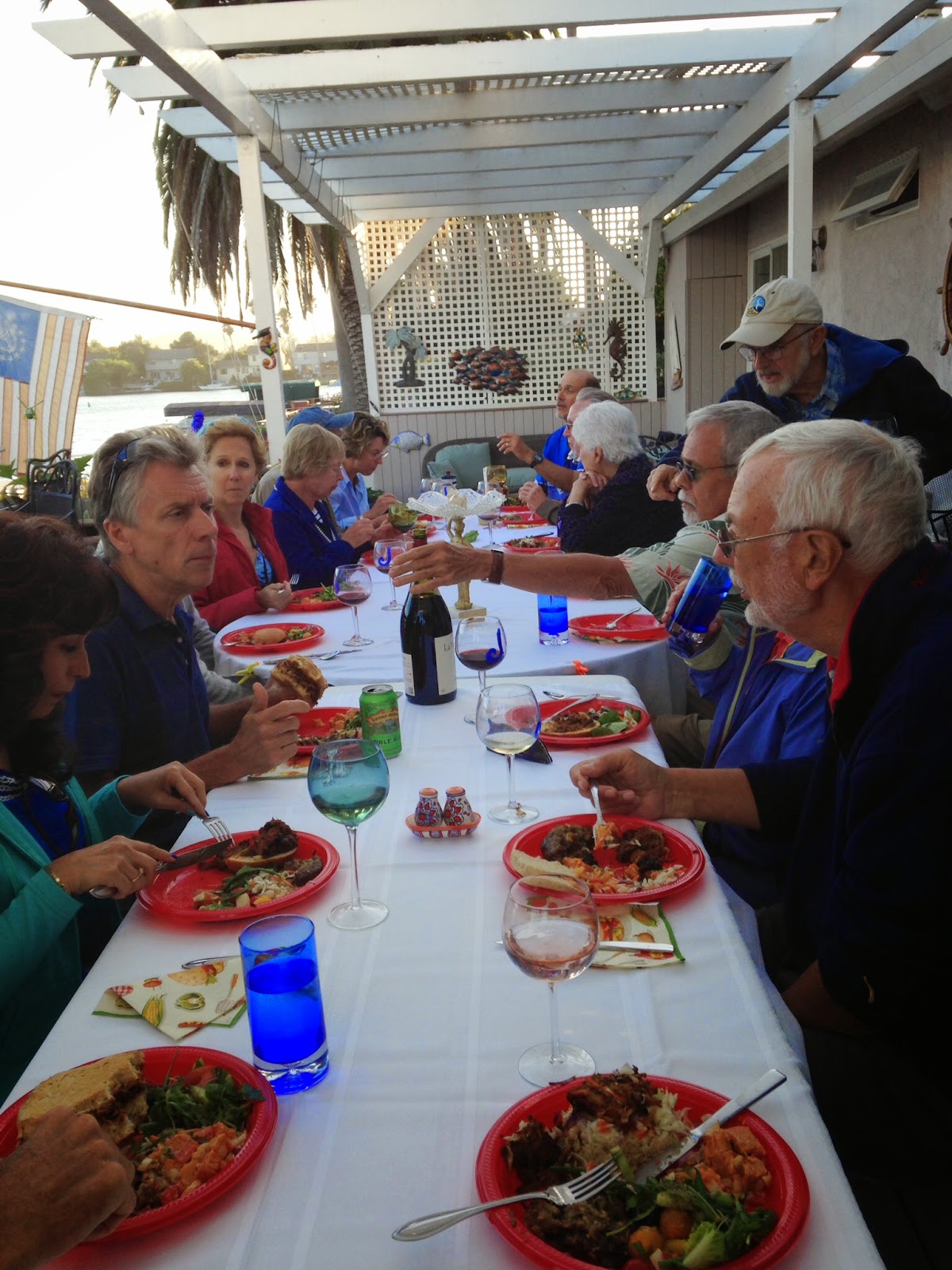 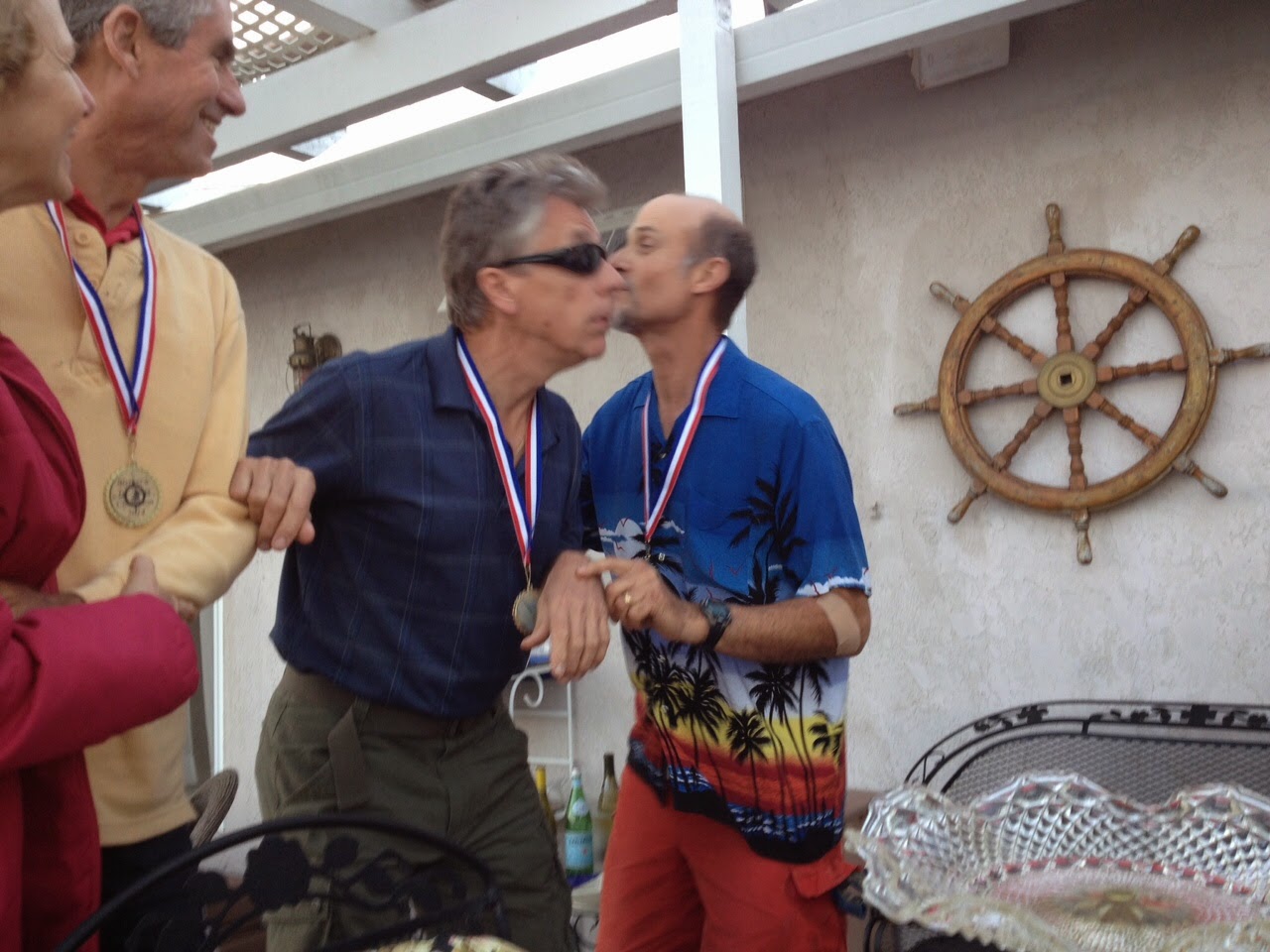 Overall winner Richard Posthuma receiving his award from the Grand Master. A kiss too - lucky fellow! 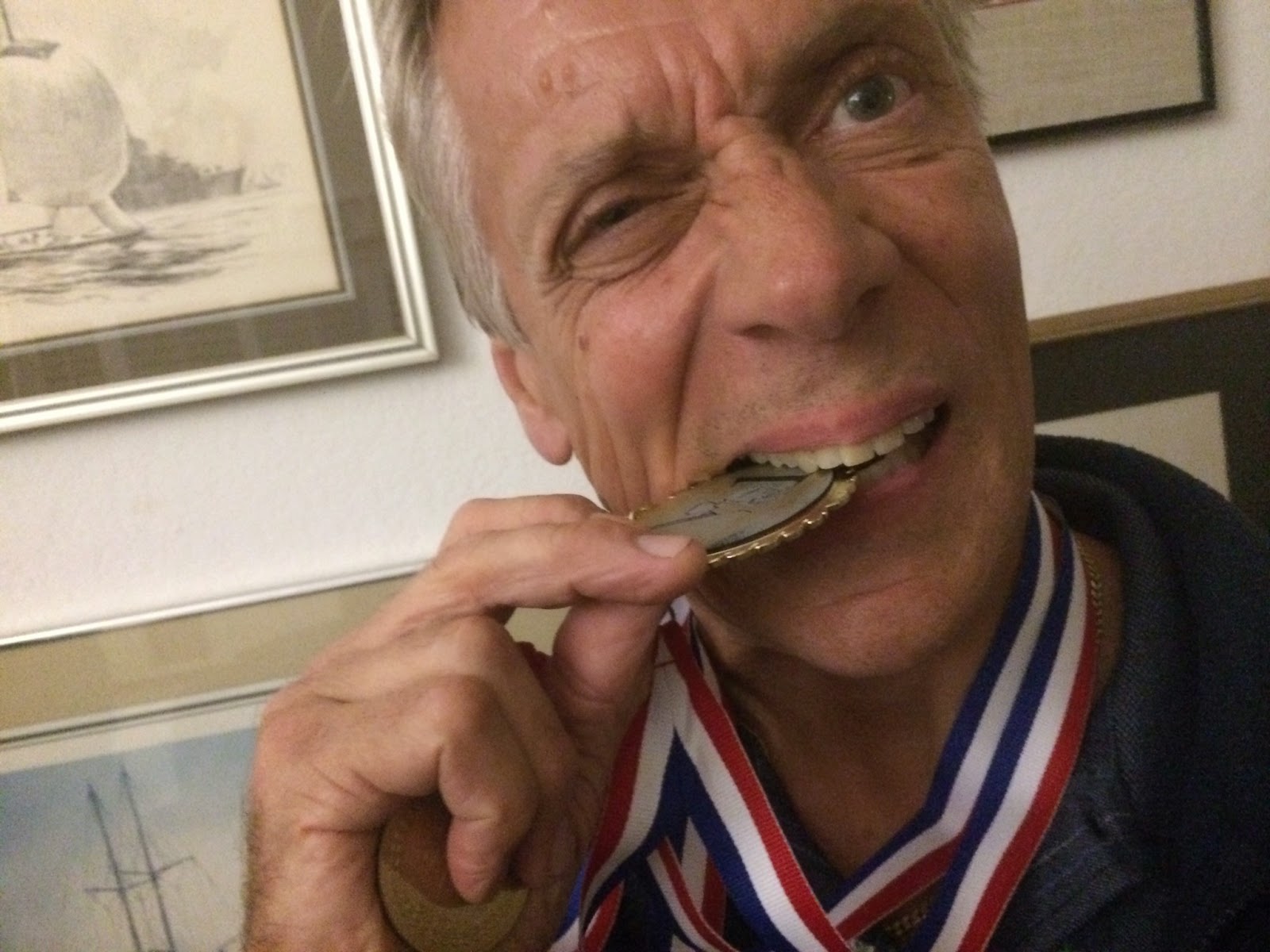 Testing to be sure it's made from genuine potmetal.


A couple days later, I helped Tom Faraola step the mast on his new toy, a Santa Cruz 27 that he has added to his quiver of sailboats. He and Kristy and I went out for a sail and got one of the four spinnakers up. 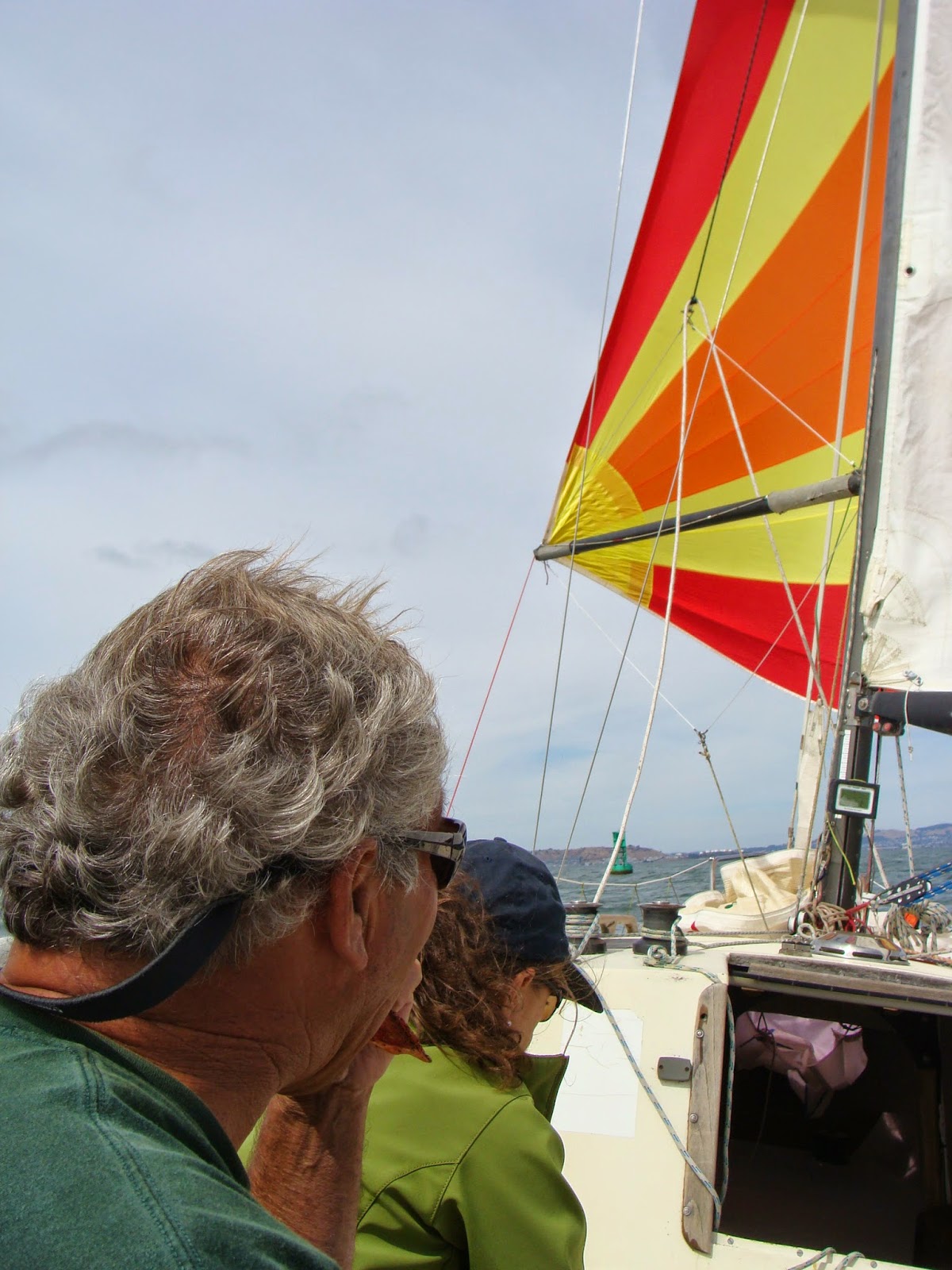 Tom wants to do the Jazz Cup on Labor Day weekend, a spinnaker run from SF to Benicia for a great jazz festival. Then cruise back the next day. It's about 30 miles each way. 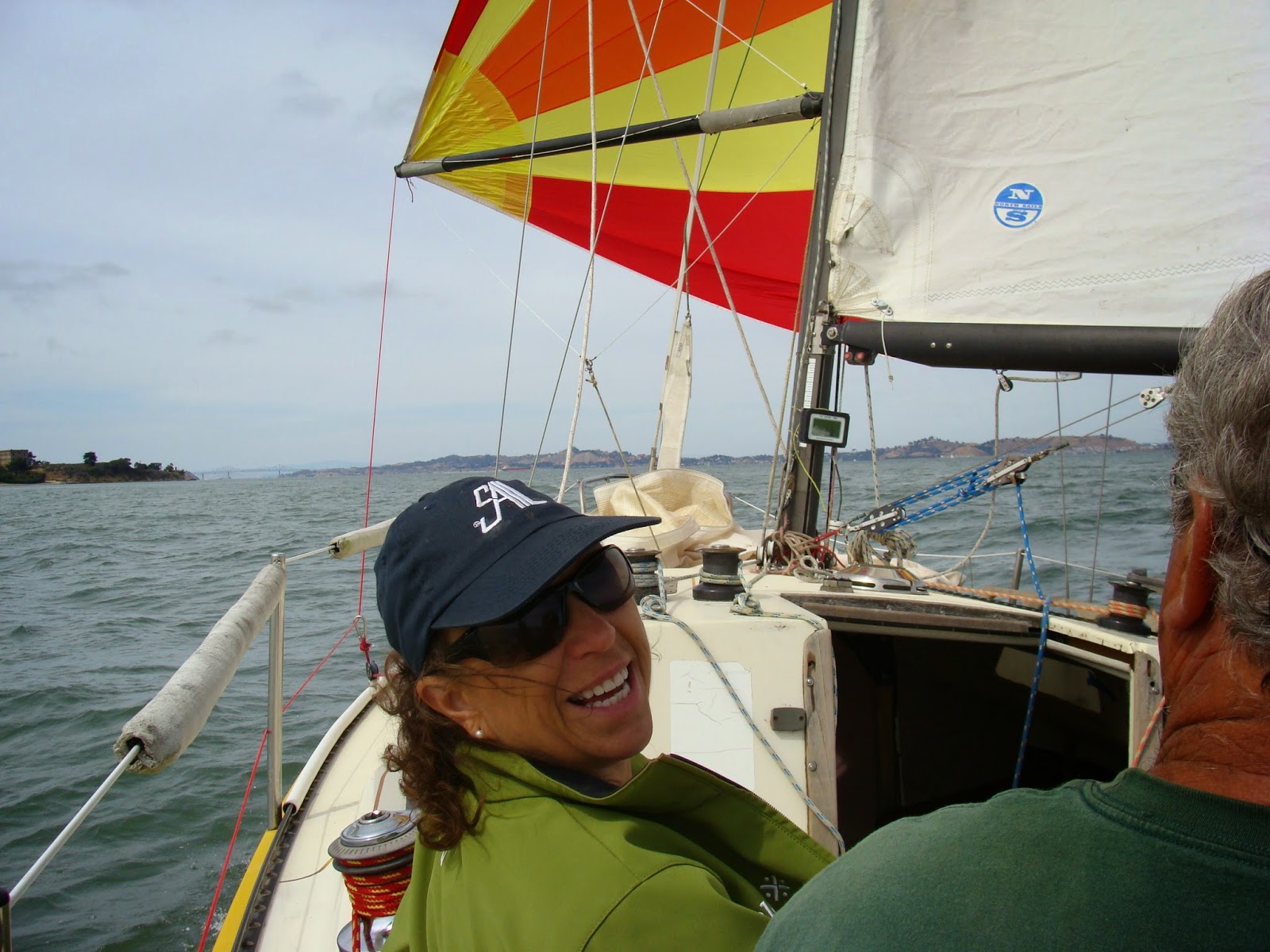 OK, nuff fun, back to work then.